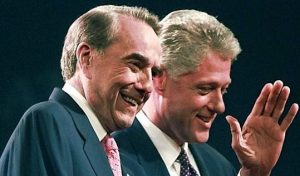 A Comparison of the Political Personalities of 1996 U.S. Presidential Candidates Bill Clinton and Bob Dole (Paper presented by Aubrey Immelman at the 19th Annual Scientific Meeting of the International Society of Political Psychology, Vancouver, BC, June 30–July 3, 1996).

The Clinton Chronicle: Diary of a Political Psychologist (Aubrey Immelman, 1998-99) — On December 19, 1998 William Jefferson Clinton became only the second U.S. president to be impeached by the House of Representatives. What follows is a chronicle, from my perspective as a political psychologist, on debates and controversies in the unfolding of this national drama. The curtain rises as the president prepares on August 17, 1998 to testify before the grand jury in the Starr investigation. The narrative proceeds to the final act as the Senate acquits the president on February 12, 1999 on articles of impeachment brought by the House. But this nightmarish production has no final curtain, as Washington persists in practicing its poisonous partisan politics of personal destruction and as charges of sexual assault more than two decades ago are leveled against Bill Clinton. … Full report