The Political Personality of 2020

A psychological analysis of U.S. senator Kamala Harris — Democratic vice-presidential nominee in the 2020 U.S. presidential election — by Anne Marie Griebie, Yitao Zhang, and Aubrey Immelman, Ph.D., at the Unit for the Study of Personality in Politics revealed that Sen. Harris’s primary personality pattern is Dominant/asserting, complemented by secondary Ambitious/confident and Outgoing/congenial patterns. Typologically, Harris may be characterized as a high-dominance charismatic. 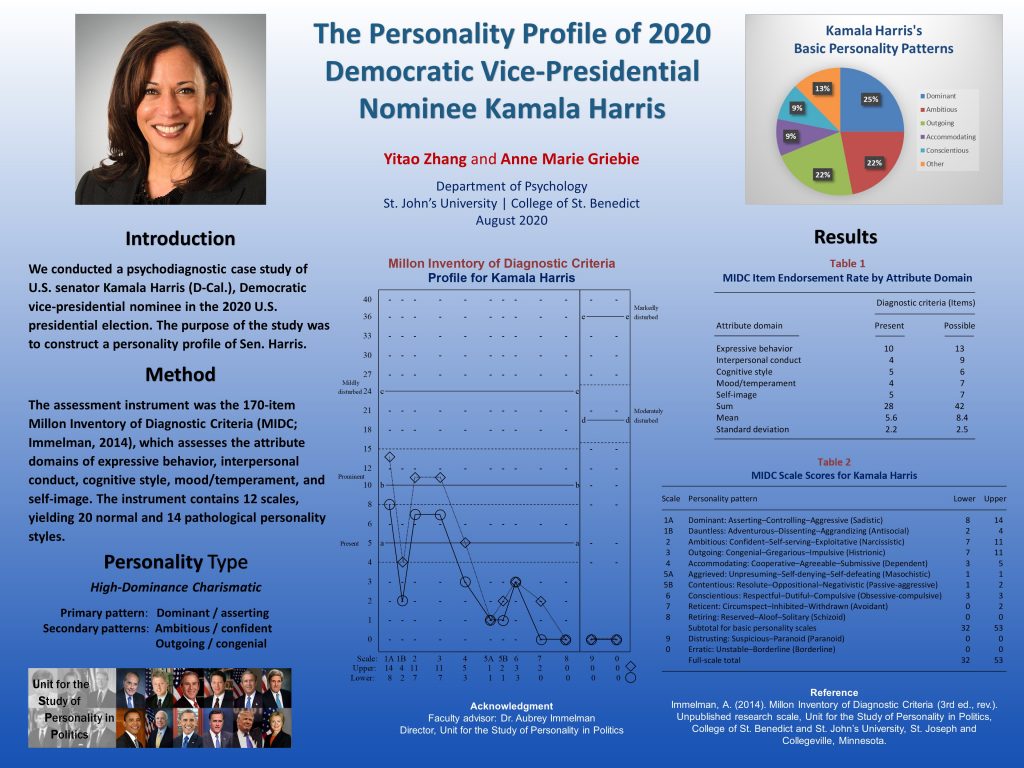 The poster presents the results of an indirect assessment of the personality of U.S. senator Kamala Harris, Democratic vice-presidential nominee in the 2020 U.S. presidential election, from the conceptual perspective of personologist Theodore Millon.

Psychodiagnostically relevant data about Harris were collected from biographical sources and media reports and synthesized into a personality profile using the Millon Inventory of Diagnostic Criteria (MIDC), which yields 34 normal and maladaptive personality classifications congruent with DSM-III-R, DSM-IV, and DSM-5.

The personality profile yielded by the MIDC was analyzed in accordance with interpretive guidelines provided in the MIDC and Millon Index of Personality Styles manuals. Harris’s primary personality pattern was found to be Dominant/asserting (a measure of aggressiveness), complemented by secondary Ambitious/confident and Outgoing/congenial patterns — measures of narcissism and extraversion, respectively.

In summary, Harris’s personality composite can be characterized as high-dominance charismatic — charismatic by virtue of the elevated Ambitious–Outgoing amalgam.

Dominant individuals enjoy the power to direct others and to evoke obedience and respect; they are tough and unsentimental and often make effective leaders. Ambitious individuals are bold, competitive, and self-assured; they easily assume leadership roles, expect others to recognize their special qualities, and sometimes act as though entitled. Outgoing individuals are dramatic attention-getters who thrive on being the center of social events, go out of their way to be popular with others, and have confidence in their social abilities.

Harris’s major personality strengths in a political role are her confident assertiveness and personal charisma. Her major personality-based shortcoming is likely to be a predisposition to occasional lapses in emotional restraint or self-discipline. 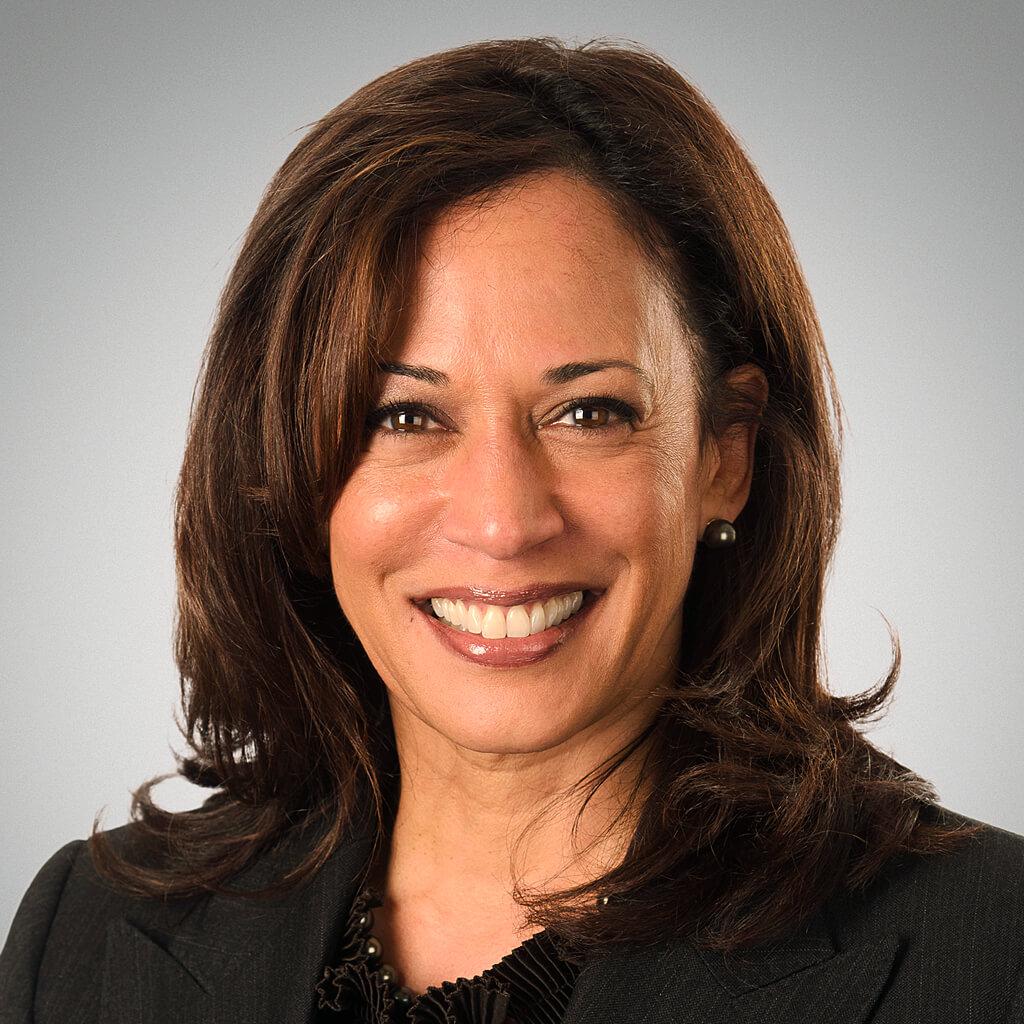 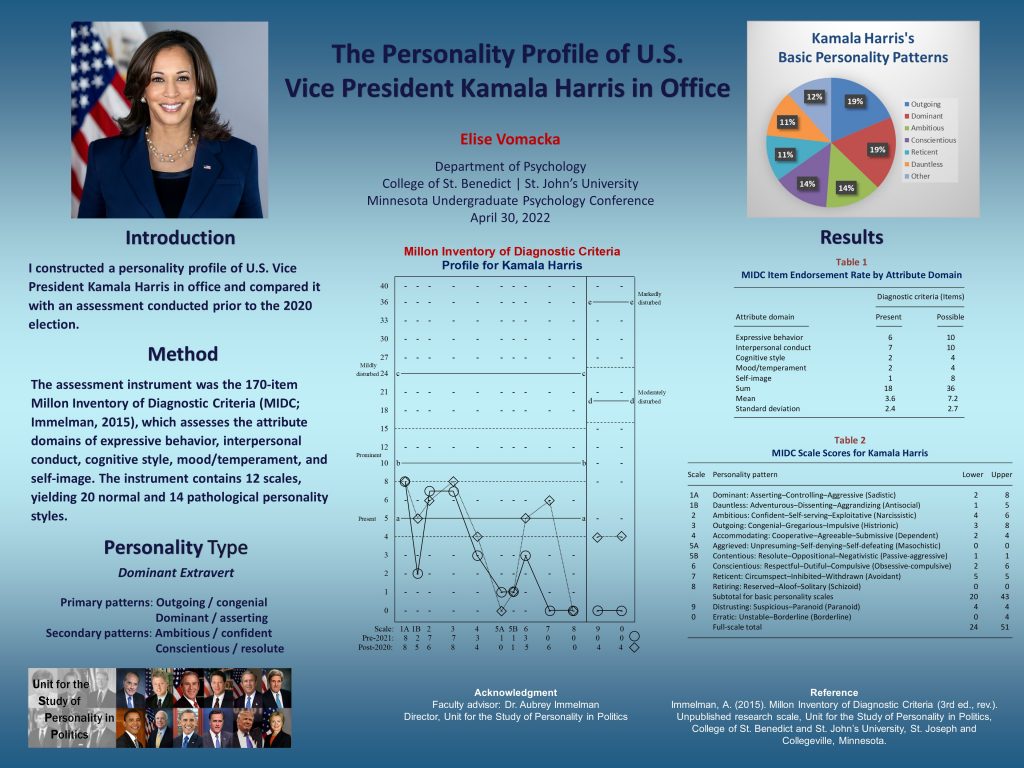 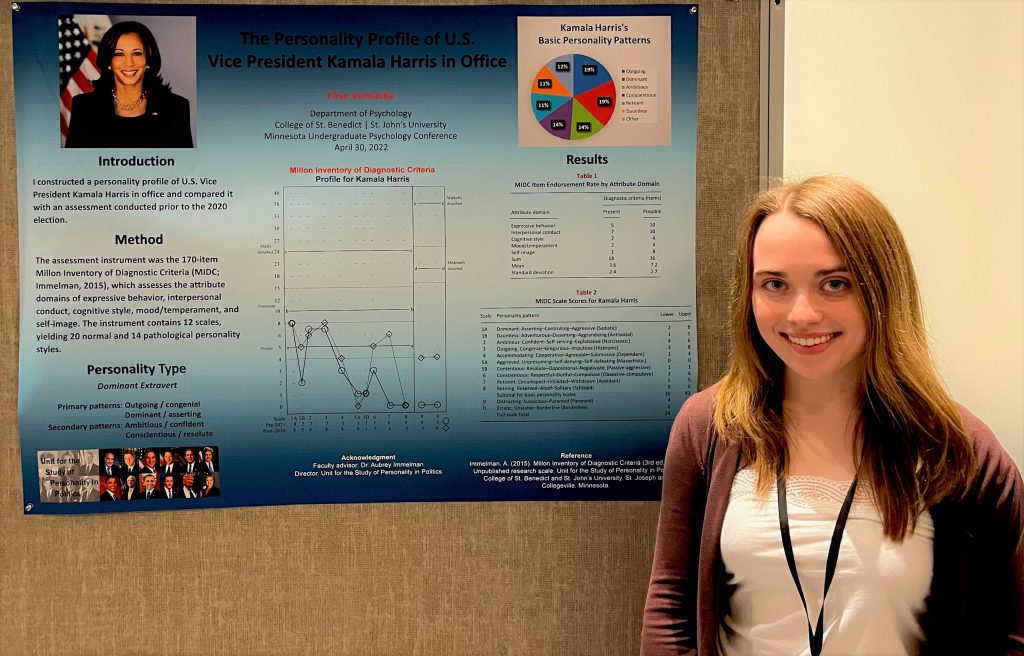 Biden’s choice of Kamala Harris as VP candidate ‘unprecedented’ (William Roberts, Al Jazeera, Aug. 11, 2020) — Biden is an outgoing and accommodating personality, which should allow him to mesh well with Harris, said Aubrey Immelman, a professor of political psychology at the College of Saint Benedict and Saint John’s University in Minnesota. His deliberation and thoughtful process suggest Biden was able to develop “personal chemistry” with her. It is quite likely as well that Harris’s friendship with Biden’s late son Beau also helped. And she may well have been a consensus pick among his close advisers, including his wife Jill Biden, as well as Barack and Michelle Obama. “Metaphorically, Biden is led more by ‘heart’ than by ‘head’,” Immelman told Al Jazeera.

In the vice-presidential debate on October 7, Harris will go up against sitting vice president Mike Pence [link added].

Yet in contrast to Donald Trump [link added], little has been said about Kamala Harris by mental health professionals. What is known about her personality? …

In the world of personality assessment, psychologist Aubrey Immelman of the College of St. Benedict and St. John’s University has been researching and rating candidates for decades. Drawing on the work of Theodore Millon [link added], Immelman and his group have developed a personality metric that uses open sources and empirical ratings to assess, at a distance, the personality of major presidential candidates, “as publicly perceived.” …

How does Harris look to Immelman?

In her empirical ratings, Harris scored highly on the traits of “dominant,” “narcissistic/confident,” and “outgoing.” This assertive and charismatic pattern, Immelman predicted last year [link added], made Harris, with Biden, one of the top two most electable candidates then running in the Democratic primary. (Outgoing, dominant candidates often do better than conscientious/dutiful ones, who may have trouble “reading” others and are less happy while working the room.)

As Biden’s ratings show, he too is outgoing. But he emerges as more of an accommodator or conciliator than Harris. How would the two get along in office?

In a recent e-mail interview, Immelman told me that if Harris is elected as vice president, Harris might well outshine Biden. More ambitious than he is, Harris “may play a prominent role” in any Biden administration. Indeed, Immelman ventures to suggest that the “cooperative and loyal” Biden is better suited to being vice president than president. …

What about the upcoming vice presidential debate between Harris and Mike Pence? Immelman cautions that he had less information to work with in assessing Pence. But the vice president’s ratings show high scores on conscientiousness.

Pence’s major asset in the debate, Immelman predicts, “will be his attention to detail” in articulating and supporting Trump’s positions.

A conscientious style may be helpful in office, Immelman said, especially in the executive branch. But it is not so helpful in campaigning. A conscientious personality can come across as rigid, preachy, and even boring—a potential hazard for the vice president on October 7.

“I think Harris will have the edge,” Immelman told me. In his view, Harris’s gregarious personality, confidence, and dominance are likely to throw the cautious Pence off guard. This will be especially true if the debate is “free-wheeling” and “less structured” in format.

Despite his findings, Immelman acknowledges some uncertainty. “The area that gives me the most pause,” said Immelman, is that Harris “is somewhat lacking in ‘gravitas’ – a shortcoming not evident in Pence. Harris sometimes has a slightly unserious tone, even when addressing serious matters.” For Immelman, this makes for incongruence between the content of what Harris says and the facial expression and body language she employs when she says it.

What Kind of Political Leader is Kamala Harris?

The ‘leadership trait analysis’ developed by Margaret G. Hermann presents seven characteristics that explain and predict leaders’ domestic and foreign policy-making. This method, which comes from political psychology, uses an ‘at-a-distance’ technique. Computer-assisted analysis of an individual’s speeches and interviews with respect to a ‘norming group’ of other Western heads of government determines various leadership characteristics and assesses a specific political leadership style. The Democratic V.P. nominee’s style can indicate how she will manage crises.

With her context-dependent focus on relationships, Kamala Harris can be expected to approach crises pragmatically. She is likely to counter growing societal polarisation by reconciling the needs of her electorate with those of the Republican camp. Harris’s management style suggests that she approaches complex crises in a practical, goal-oriented manner and would work domestically and internationally for joint responsibility and shared accountability. During the hearings about a possible seat on the Supreme Court for Brett M. Kavanaugh, Harris demonstrated political instinct and confidence in her ability to influence decision-making.

Joe Biden also has a collegial, directive leadership style. Both candidates strive to return to the status quo under President Barack Obama – with improvements in selected policy areas that include Harris’s new take on police reform. She differs from Biden by more than a standard deviation in only one of seven leadership characteristics [see Note]. Harris’s significantly lower ‘conceptual complexity’ means that she can be expected to have difficulty in fully understanding ambiguity. Such leaders tend to trust their intuition and are likely to choose the first option.

Philipp Söker is lecturer at the Institut for Political Science (IPW) at the University of Heidelberg.

A preliminary psychological analysis of U.S. Senator Kamala Harris by Josie Thelen, Amber Lauer, Lauren Redmond, Kailee Gallagher, Courtney Conlin, and Aubrey Immelman, Ph.D., at the Unit for the Study of Personality in Politics, revealed that Sen. Harris’s primary personality patterns are Outgoing/congenial, Dominant/asserting, and Ambitious/confident, complemented by secondary Accommodating/cooperative and Conscientious/respectful features. In summary, Harris may be characterized as a dominant extravert. 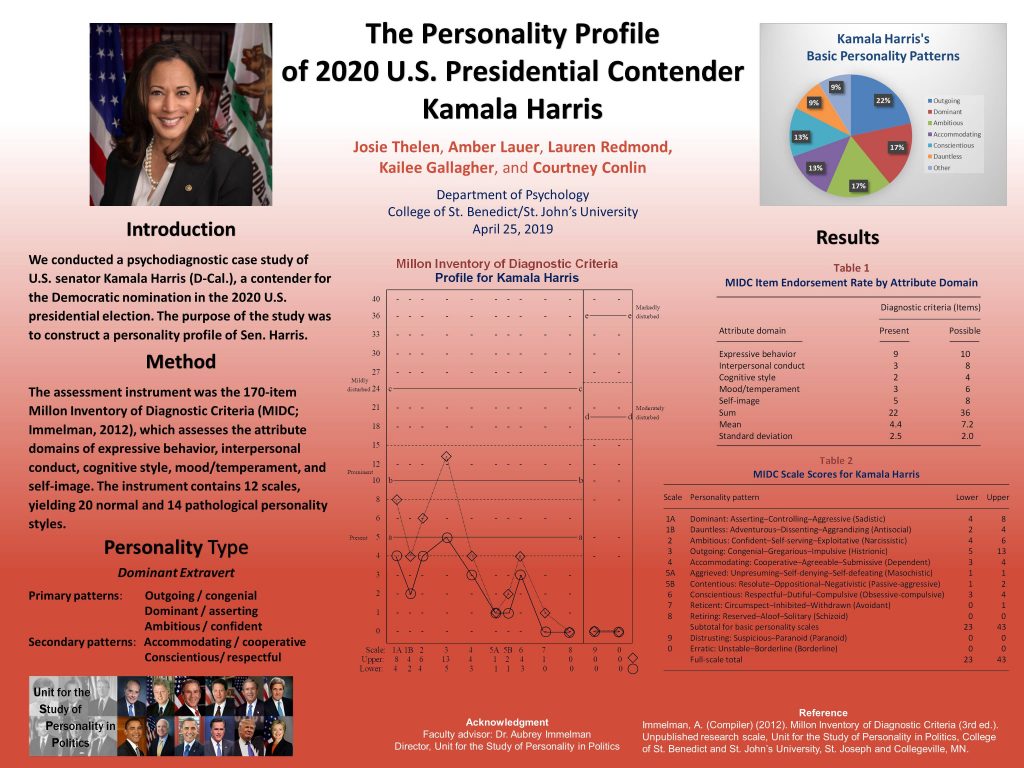 The poster presents the results of an indirect assessment of the personality of U.S. Senator Kamala Harris — a contender for the Democratic nomination in the 2020 presidential election — from the conceptual perspective of personologist Theodore Millon. Information concerning Harris was collected from biographical sources and media reports and synthesized into a personality profile using the Millon Inventory of Diagnostic Criteria (MIDC), which yields 34 normal and maladaptive personality classifications congruent with DSM-III-R, DSM-IV, and DSM-5.

The personality profile yielded by the MIDC was analyzed on the basis of interpretive guidelines provided in the MIDC and Millon Index of Personality Styles manuals. Harris’s primary personality patterns were found to be Outgoing/congenial, Dominant/asserting, and Ambitious/confident, complemented by secondary Accommodating/cooperative and Conscientious/respectful features.

In essence, Harris may be characterized as a dominant extravert — sociable, assertive, and self-confident, complemented by cordiality and a sense of duty.

Sen. Kamala Harris takes the stage at about 57:00

Update: On August 11, 2020, Joe Biden announced his selection of Kamala Harris as his vice-presidential running mate in the 2020 presidential election.

How Kamala Harris’s campaign unraveled (Jonathan Martin, Astead W. Herndon, and Alexander Burns, New York Times, Nov. 29, 2019) — [T]here is only one candidate who rocketed to the top tier and then plummeted in early state polls to the low single digits: Ms. Harris. … It was her abundant political skills — strong on the stump, a warm manner with voters and ferocity with the opposition that seemed to spell trouble for Mr. Trump — that convinced many Democrats of Ms. Harris’s potential. … Some of Ms. Harris’s aides said she had better instincts than her brain trust. One official recalled that during the flight from Oakland to Iowa on the night she announced her campaign in January, Ms. Harris told senior members of her campaign team that she wanted to “go stealth.” However, instead of pursuing retail politics and introducing herself to voters in more intimate settings, as Ms. Harris suggested she preferred, her senior aides determined it was more important to cement herself in the top tier and play for “big, television moments,” as one put it. … The organizational unsteadiness of Ms. Harris’s campaign reflects a longtime personal trait, according to allies: she is a candidate who seeks input from a stable of advisers, but her personal political convictions can be unclear. … 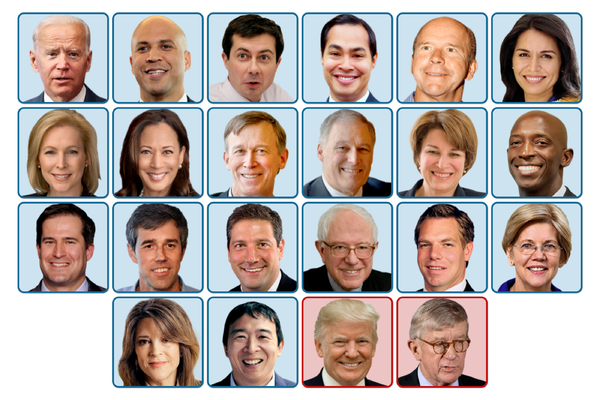 Which Democratic Presidential Candidate Is Most ‘Electable’? (May 6, 2019)

Projecting the Winner of the 2020 Presidential Election: The Personal Electability Index (July 8, 2019)

Who will win the 2024 Democratic presidential nomination? 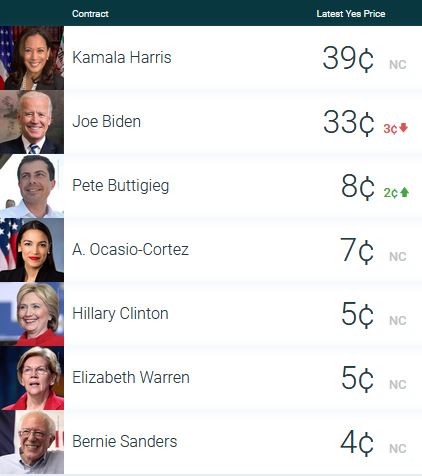