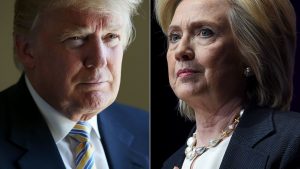 A political psychology professor at the College of St. Benedict/St. John’s University said his research predicts that if Hillary Clinton wins the Democratic nomination for president, she will defeat any Republican candidate — except Donald Trump.

Aubrey Immelman, who directs the Unit for the Study of Personality in Politics at CSB/SJU, developed a personal electability index to predict likely election winners. Ahead of the Super Tuesday caucuses, Immelman said his model projects that if Trump wins the Republican nomination, he would defeat Clinton.

The index has accurately predicted before Super Tuesday the outcome of every presidential election since 1996. However, Immelman said he’s a lot less certain of its accuracy in this unconventional election. In past years, the frontrunners were all career politicians.

“They played the game according to the rules,” Immelman said. “With Trump, that’s kind of a wild card.”

Immelman [noted that his] prediction is at odds with a CNN/ORC poll released Tuesday, which found that both Clinton and Democratic rival Bernie Sanders would defeat Trump in the general election.

Immelman’s model uses candidates’ perceived personality traits to predict which contender will resonate most favorably with independent voters, who typically base their choice primarily on a candidate’s personal qualities rather than party allegiance. …

One of the most important factors is whether a candidate is extroverted or introverted, Immelman said. Introverted candidates — past examples include Al Gore and Jeb Bush — have more difficulty interacting with people on the campaign trail. …

Trump scored high both on extroversion and dominance. Dominant candidates are perceived as strong leaders, which is important to the American electorate, Immelman said. …

Immelman acknowledges that the election outcome will be swayed by many factors, including how many people, especially new voters, turn out to the polls in November. He said he isn’t sure if he believes Trump could win a general election, but said he feels obligated to report what his model is forecasting. … Full report