A psychological analysis of retired pediatric neurosurgeon Dr. Ben Carson — a contender for the Republican nomination in the 2016 presidential election — by Hannah Hoppe and Aubrey Immelman, Ph.D., at the Unit for the Study of Personality in Politics, revealed that Carson’s most prominent personality patterns are Dominant/assertive, Ambitious/confident, and Conscientious/respectful. In summary, Carson’s personality composite can be characterized as a confident, deliberative organizer. 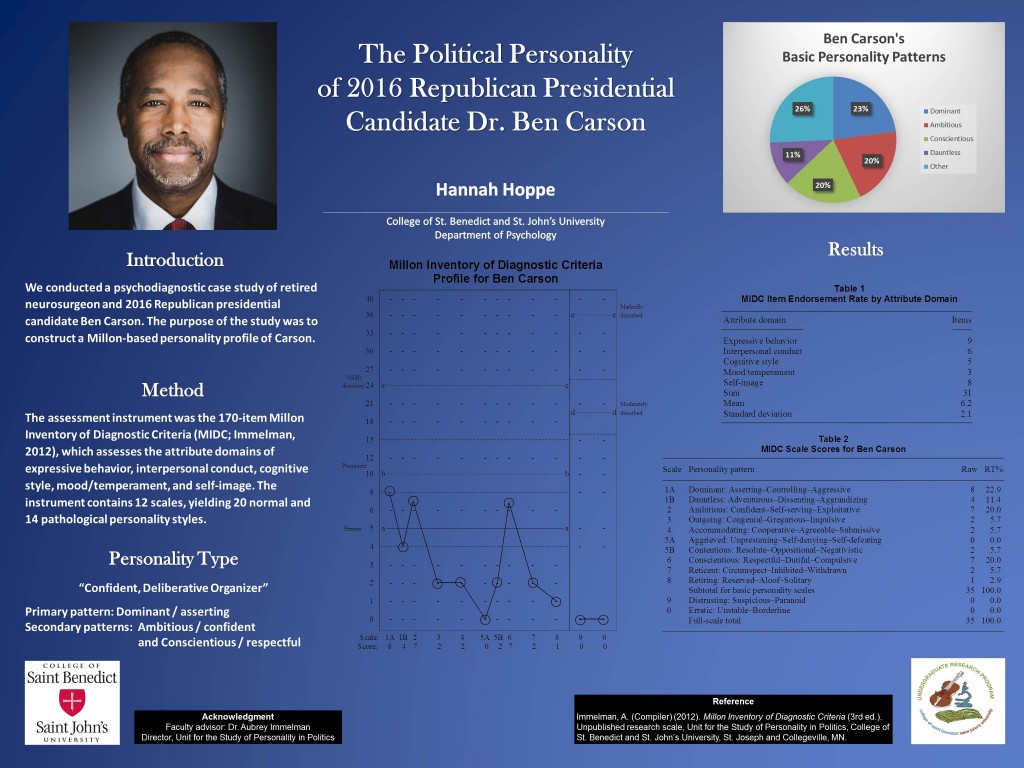 Summary of the major findings of the study

Carson’s Restraint May Keep Him from the Top Spot (Hannah Hoppe, St. Cloud Times, Aug. 30, 2015) — “The first person ever to go under Dr. Ben Carson’s knife … was stabbed by him in school.” With such an eventful chapter in his childhood history, psychological analysis of pediatric neurosurgeon and 2016 Republican presidential hopeful Ben Carson seems almost disappointing, revealed nothing quite so dramatic. In fact, Carson’s personality profile turns out to be rather unremarkable — for a presidential candidate, that is. … Full report

Ben Carson scores moderately on the Millon Inventory of Diagnostic Criteria-based Personal Electability Index, which has accurately predicted the outcome of every presidential election since 1996.

Following are the PEI calculations for Ben Carson:

Trump, Carson in Close Fight in Iowa Poll (Mark Hensch, The Hill, Aug. 27, 2015) — Retired neurosurgeon Ben Carson and businessman Donald Trump are neck-and-neck for the GOP’s 2016 presidential nomination in Iowa, a new poll says. The Bloomberg/Des Moines Register survey released on Saturday finds that the two are tied in Iowa caucus-goer support when voters’ first and second choices for the Republican coronation are combined. … Full report

Ben Carson’s Secret Weapon: He’s Getting Better With Age (Matt K. Lewis, The Daily Caller, Sept. 2, 2015) — Ben Carson is the rarest of political candidates: He actually learns from his mistakes. … If politicians are known to have egos, then you might expect a world-class surgeon (a profession that lends itself to developing a god complex!) to have a huge one. But a willingness to learn is a sign of humility, and Dr. Carson is showing signs that he is introspective and self-critical. … Full report