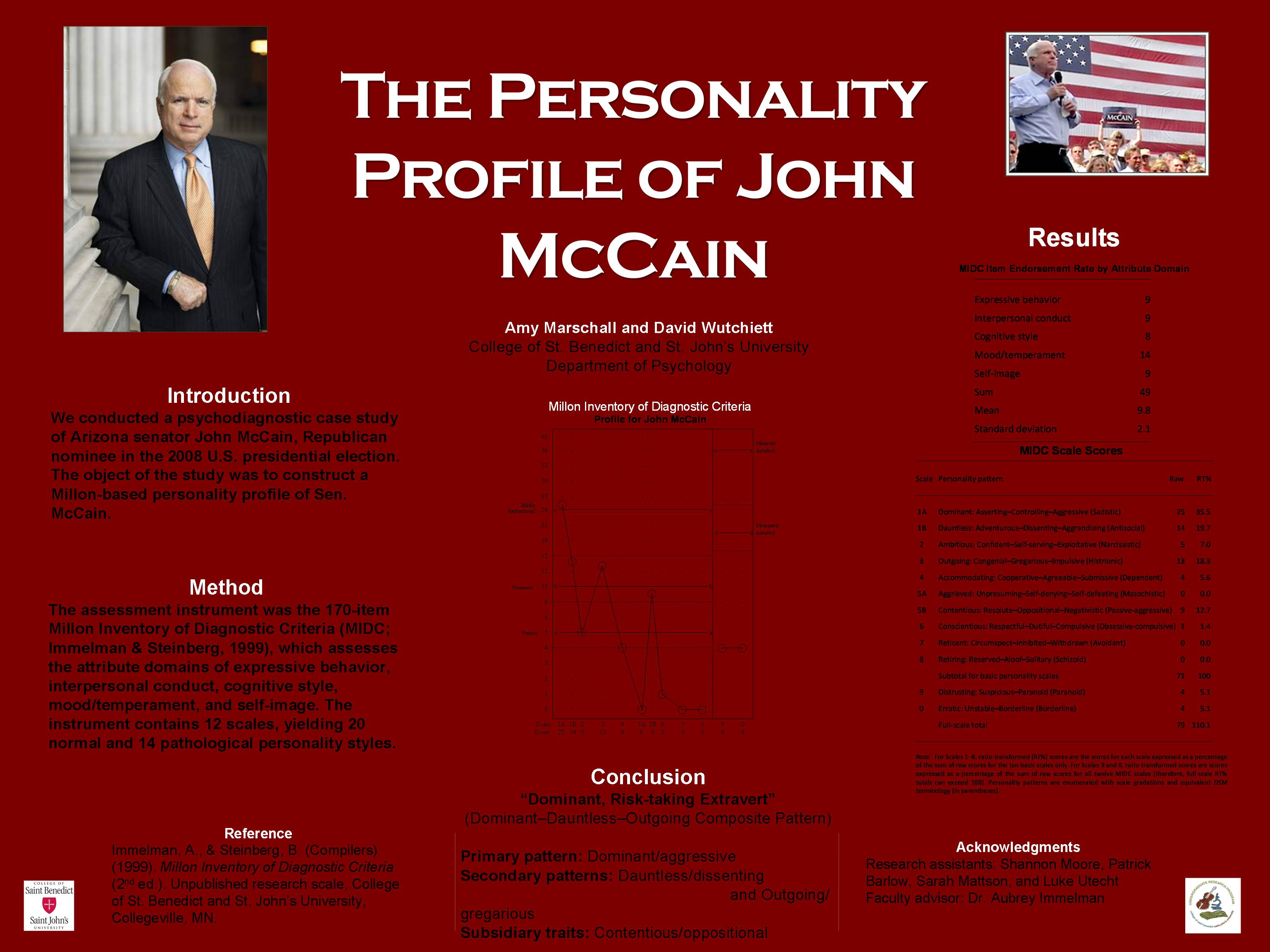 This paper presents the results of an indirect assessment of the personality of Arizona senator John McCain, Republican nominee in the 2008 U.S. presidential election, from the conceptual perspective of personologist Theodore Millon.

Psychodiagnostically relevant data regarding Sen. McCain was extracted from biographical sources and published reports and synthesized into a personality profile using the second edition of the Millon Inventory of Diagnostic Criteria (MIDC), which yields 34 normal and maladaptive personality classifications congruent with Axis II of DSM–IV.

The personality profile yielded by the MIDC was analyzed on the basis of interpretive guidelines provided in the MIDC manual. McCain’s primary personality pattern was found to be Dauntless/dissenting, with secondary features of the Outgoing/gregarious and Dominant/controlling patterns.

The combination of Dauntless and Outgoing patterns in McCain’s profile suggests a risk-taking adventurer personality composite. Leaders with this personality prototype are characteristically bold, fearless, sensation seeking, and driven by a need to prove their mettle.

McCain’s major personality strengths in a leadership role are the important personality-based political skills of independence, persuasiveness, and courage, coupled with a socially responsive, outgoing tendency that can be instrumental in connecting with critical constituencies for mobilizing support and implementing policy proposals. His major personality-based limitation is a predisposition to impulsiveness, one manifestation of which is a deficit of emotional restraint.

The major implication of the study is that it offers an empirically based personological framework for anticipating McCain’s leadership style as chief executive, thus providing a basis for inferring the character and tenor of a prospective McCain presidency.

“John McCain: A question of temperament” (Aubrey Immelman St. Cloud Times, Nov. 1, 2008, p. 7B) — As Arizona Sen. John McCain tries to close the gap with Barack Obama in the final weekend leading up to Tuesday’s presidential election, his task is to convince the American people that he’s the right man to lead the nation at a time when America faces daunting economic challenges at home and urgent national security threats abroad. Voters, for their part, must discern whether McCain has the right stuff to move the nation in the right direction. A useful metric to take a measure of the man is temperament — that is, McCain’s mental and emotional predisposition to action. … Full report

“McCain’s maverick nature is double-edged sword” (Amy Marschall and Aubrey Immelman, St. Cloud Times, Oct. 15, 2008, p. 7B) — As the 2008 presidential campaign enters the home stretch in a time of growing economic uncertainty, voters are taking a new look at John McCain, who clinched the Republican nomination largely on the basis of his military and foreign policy credentials in a time of war. … To obtain a more precise reading of the real McCain, we consulted four personality profiles of the Arizona senator, developed at the Unit for the Study of Personality in Politics at the College of St. Benedict and St. John’s University in 1999, 2007, and the spring and summer of 2008. Collectively, the profiles reveal a highly dominant individual with a dauntless, dissenting, adventurous streak and a strong outgoing tendency. … Full report

“Maverick McCain finds his mojo — But what does it mean?” (Patrick Sweetman and Aubrey Immelman, St. Cloud Times, Jan. 10, 2008, p. 7B) — John McCain’s victory in Tuesday’s New Hampshire Republican primary has injected new life in a presidential campaign some had all but given up for dead. With recent polls showing McCain to be the Republican contender best positioned to beat the Democratic nominee in November, the resuscitation of McCain’s presidential prospects in New Hampshire raises anew the question of how he might govern as leader of the free world. … Full report

“Former POW McCain’s rise in polls leads to more scrutiny” (Melisa S. Illies and Aubrey Immelman, St. Cloud Times, Nov. 28, 1999, p. 11B) — In the first of our College of St. Benedict/St. John’s University presidential candidate profiles (St. Cloud Times, Nov. 7), Stephanie Anderson and Holly Berreau commented on Elizabeth Dole’s withdrawal from the 2000 presidential race. It was inevitable that Dole’s departure would prompt more intense public scrutiny of Arizona Sen. John McCain as the now unrivaled challenger for Texas Gov. George W. Bush’s front-runner status in the bid for the Republican nomination. Unfortunately for McCain, his newfound ascent to prominence has been troubled by turbulence. At issue: persistent reports in the media of a “volcanic temper,” casting doubt on his fitness to govern. … Full report