The purpose of the Unit for the Study of Personality in Politics Media Tipsheet is threefold. First, it offers political reporters looking for a fresh story angle a sometimes unique, often unconventional perspective on politics. Second, it serves as a repository for research-based political analysis. Analyses and predictions in the Tipsheet are, in effect, research hypotheses to be tested prospectively against actual event outcomes, which in turn serve to refine the guiding theory of personality and leadership that informed the analysis and prediction in the first place. Third, the Tipsheet aims to provide voters, reporters, and policymakers with politically unbiased, nonpartisan insights into aspects of political leaders’ and candidates’ personal character likely to impinge on their public lives, policy preferences, decisionmaking, and leadership prospects.

Anticipating the Outcome of the 2020 Presidential Election

Historian who correctly predicted every election since 1984 makes his call
Fox News, October 30, 2020 — American University Professor Allan Lichtman joins ‘The Story’ to make his prediction on who will win the 2020 presidential election.

By Aubrey Immelman
Unit for the Study of Personality in Politics
November 1, 2020

On July 8, 2019, I announced that the Unit for the Study of Personality in Politics’s Personal Electability Index (PEI) projected that none of the seven front-running Democratic contenders assessed at the USPP — in descending order of PEI scores Joe Biden, Kamala Harris, Bernie Sanders, Amy Klobuchar, Beto O’Rourke, Pete Buttigieg, and Elizabeth Warren — would defeat Donald Trump in the 2020 U.S. presidential election.

At the time, this election-outcome forecast was at variance with contemporaneous polls, for example, an ABC News/Washington Post poll, conducted June 28-July 1, 2019, that showed Trump losing against or statistically tied with the front-runners for the Democratic nomination for president:

Among all adults …, Joe Biden leads Trump by 14 points. But that narrows among the other four Democrats tested against Trump in this poll — an 8-point lead for Kamala Harris, a slight 7 points for Elizabeth Warren, 6 for Bernie Sanders and 4 for Pete Buttigieg. 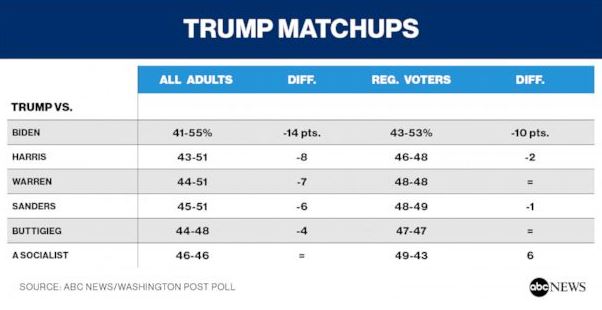 In the past several months, I have frequently had to field inquiries regarding the status of a projection issued so far in advance of the election — nearly 16 months. For example, on September 29, Cambridge, Mass., psychiatrist John Martin-Joy, M.D., as part of his research for a Psychology Today blog on Joe Biden’s mental state, wrote in an email: “I’m curious if at this point you stand by the PEI’s prediction that Trump will win.”

I responded as follows:

Regarding my simple little PEI heuristic, I have no choice but to “stand by” it; after all, Trump’s personality has not changed significantly since I issued my prediction on July 8, 2019 — nor would one expect it to change at his age, save for organic reasons. … The PEI is blissfully unaware of SARS-CoV-2, the economy, the unemployment numbers, or Trump’s tax returns leaked to the NYT shortly before the election. An implicit assumption of the PEI model is a relatively typical or “normal” election cycle — say (metaphorically) within one standard deviation of the mean. If the PEI projection of a Trump win turns out to be correct, it should be considered strong suggestive evidence for the robustness of the model.

In practical terms, the point I was attempting to communicate to Dr. Martin-Joy was that the 2020 presidential election is taking place under highly unusual circumstances; in fact, some observers have referred to the political environment as “unprecedented.”

In that regard, it should be noted that the PEI heuristic model employs candidate personality traits, as publicly perceived, to predict which contender will resonate most favorably with independent and unaffiliated voters who base their voting choice primarily on the candidate’s personal qualities as publicly displayed rather than on party-political affiliation or allegiance. The implicit assumption is that the election occurs in a relatively typical, stable political environment in which the role of personality is not overwhelmed by strong situational forces (such as a global pandemic, a deep economic recession, high unemployment, social upheaval, or widespread civil unrest). 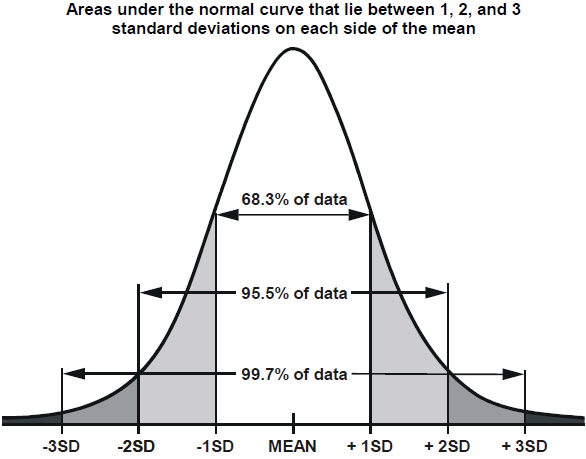 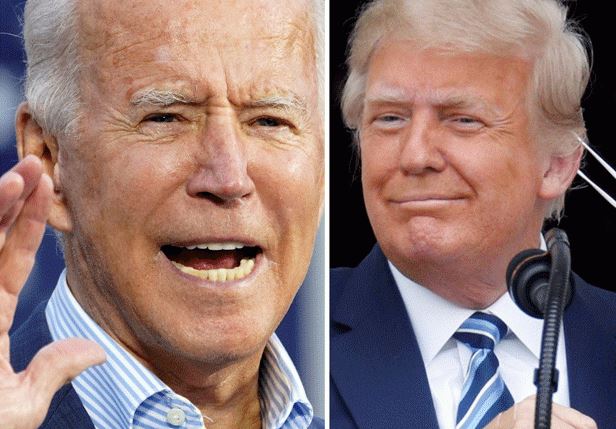 To conclude, I am not predicting the outcome of the presidential election, in which statistical models infinitely more sophisticated than my simple PEI heuristic give Joe Biden a 9-to-1 edge over Joe Biden. What I am asserting, however, is that — based solely on their respective personality profiles as assessed at the Unit for the Study of Personality in Politics — it’s advantage Donald Trump. 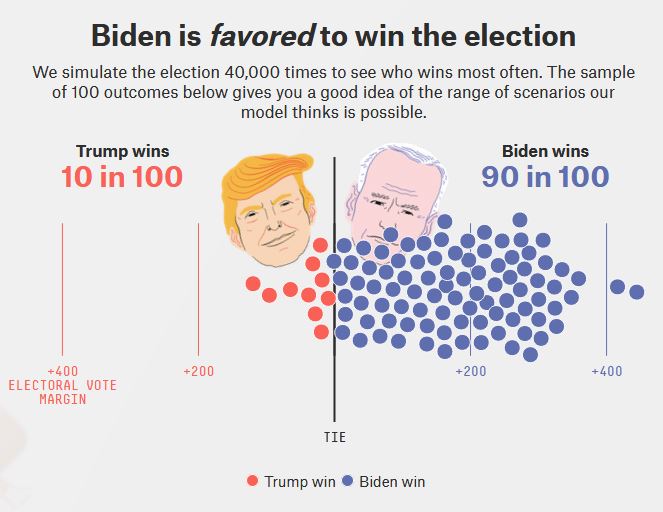 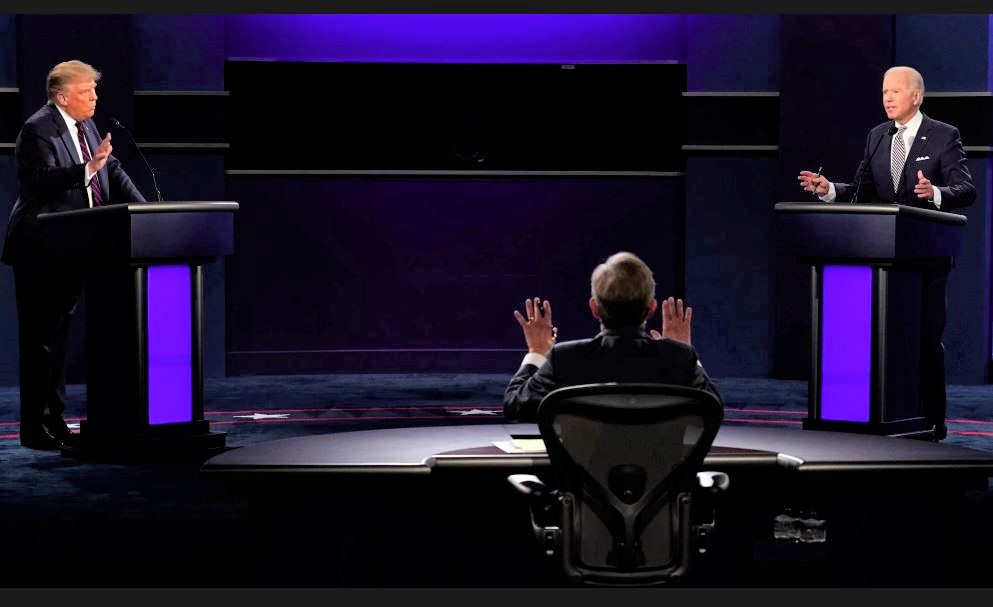 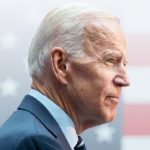 The 2020 U.S. presidential election-outcome forecast issued by the Unit for the Study of Personality in Politics on July 8, 2019, anticipated the surprising Super Tuesday Democratic primary results, with a surging Joe Biden defying polls and political pundits to seize the lead from an ascendant Bernie Sanders in the battle for the Democratic nomination for president.

The Presidential Electability Index (PEI), which has accurately predicted — before Super Tuesday — the outcome of every presidential election since 1996, was developed to forecast general election outcomes; however, the PEI heuristic model (which employs publicly perceived candidate personality traits as the predictor variable) proved to be exceptionally robust in projecting Biden’s unexpected Super Tuesday surge.

As conceptualized by the Personal Electability Index (PEI) forecasting model, Democratic contenders studied in the 2020 presidential election cycle and still in the race rank as follows in terms of predicted political impact as a general election candidate:

The Unit for the Study of Personality in Politics’ PEI model ranks Biden as more competitive than Sanders in a hypothetical general election matchup against Donald Trump.

There’s no result yet from last night’s all-important, first-in-the-nation, election season-opening Iowa caucuses. … A vote-reporting debacle has delayed results in the contest, leaving candidates and voters furious and precincts scrambling to come up with answers. Officials from two Democratic campaigns say they were told an app used to tabulate the votes crashed, and the Iowa Democratic Party said it found inconsistencies in some vote sets.

In the absence of official election results 12 hours after the caucuses, I examined the Google Analytics report of visits to the Unit for the Study of Personality in Politics pages for Democratic presidential contenders in the 7 days up to and including the Iowa caucuses (Jan. 28–Feb. 3, 2020). 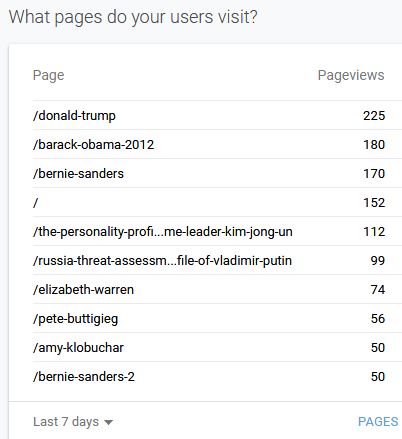 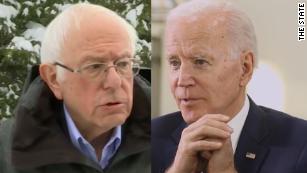 Vermont Sen. Bernie Sanders has improved his standing in the national Democratic race for president, joining former Vice President Joe Biden in a two-person top tier above the rest of the field, according to a new CNN poll conducted by SSRS. …

Overall, 27% of registered voters who are Democrats or Democratic-leaning independents back Sanders, while 24% favor Biden. Both … are significantly ahead of the rest of the field, including Massachusetts Sen. Elizabeth Warren at 14% and former South Bend, Indiana, Mayor Pete Buttigieg at 11%. Former New York Mayor Michael Bloomberg lands at 5% in the poll, while Minnesota Sen. Amy Klobuchar and businessman Andrew Yang each hold 4% support. Businessman Tom Steyer has 2%. No other candidate reaches 1% support. …

The CNN poll is consistent with a contemporaneous SurveyUSA poll, which shows Bernie Sanders marginally outperforming Joe Biden in a head-to-head matchup against Donald Trump if the election were held today:

The poll found that 52 percent of voters would choose Sanders and 43 percent Trump, giving the veteran senator a nine-point lead. Next was former vice president Joe Biden at 50 percent to Trump’s 43 percent, a seven-point lead.

The CNN and SurveyUSA polls are both at variance with the USPP’s PEI-based election-outcome forecast issued July 8, 2019, which projects Trump will defeat any and all of the seven Democratic contenders studied this election cycle, including Bernie Sanders, Joe Biden, Elizabeth Warren, Pete Buttigieg, and Amy Klobuchar.

Unit for the Study of Personality in Politics forecasts 2020 U.S. presidential election result

The Personal Electability Index (PEI) developed at the Unit for the Study of Personality in Politics projects that none of the seven Democratic contenders assessed by the USPP will be able to defeat Donald Trump.

As conceptualized by the PEI forecasting model, candidates studied in the 2020 presidential election cycle rank as follows in terms of predicted political impact as a general election candidate:

The PEI (derived from Millon Inventory of Diagnostic Criteria scale scores) has accurately predicted, before Super Tuesday, the outcome of every presidential election since 1996.

For historical context, here are the personality-based electability scores for all major-party nominees since 1996, published before Super Tuesday in presidential election years, with the successful candidate listed first: 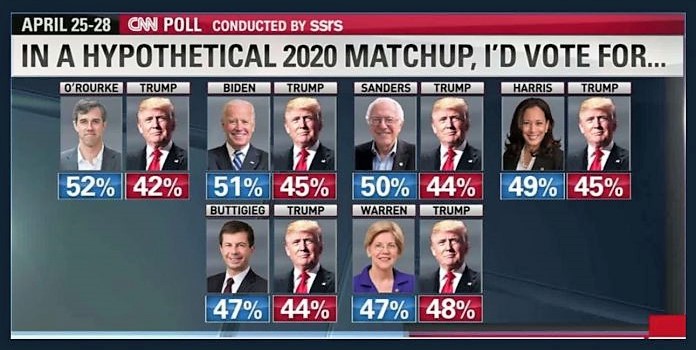 The entrance of former VP Joe Biden into the 2020 field has altered the race’s dynamics in lots of ways but none more notable than this: Electability is now front and center.

Biden’s entire candidacy is based on the idea that (a) beating Donald Trump is all that matters and (b) he is by far best positioned to do so.

In contrast to the above analysis by CNN’s “The Point,” the Unit for the Study of Personality’s Presidential Electability Index (PEI), which has accurately predicted — before Super Tuesday — the outcome of every presidential election since 1996, suggests that Joe Biden will be a stronger candidate than Beto O’Rourke in a general election matchup with Donald Trump.

The PEI heuristic model employs candidate personality traits, as publicly perceived, to predict which contender will resonate most favorably with independent and unaffiliated voters who base their voting choice primarily on a candidate’s personal qualities as publicly displayed rather than on party-political affiliation or allegiance.

Below are the PEI scores for Donald Trump, Joe Biden, and Beto O’Rourke, based on studies conducted at the USPP.