If Clinton Is Elected President, Russia’s Putin Will Be In for Rude Awakening 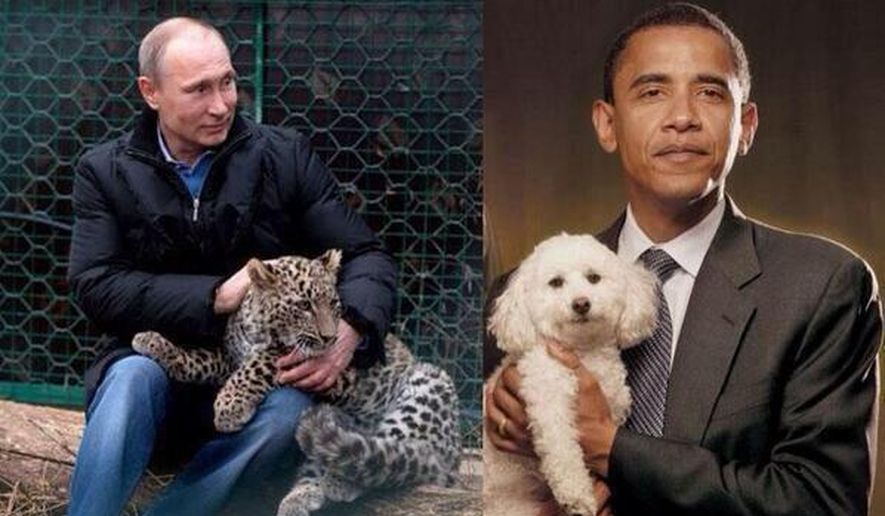 A July 31, 2014 tweet allegedly from the account of Dmitry Rogozin, deputy prime minister of Russia, ridiculed Obama by juxtaposing an image of the Russian president with a snow leopard and another of his American counterpart holding a puppy. (Image added; not part of St. Cloud Times article)

The past few months have sparked heated debate regarding President Obama’s handling of foreign policy, specifically the crisis in Ukraine and his negotiations, or lack thereof, with Vladimir Putin.

Critics have accused Obama of appearing weak and passive, imposing feeble sanctions and essentially letting Putin’s expansionism go unchecked. From their perspective, Obama is not a president who adversaries fear, but a mere annoyance who the tough, Judo-champion, ex-KGB Russian president easily can swat aside.

This mismatch between the world’s two most powerful men (according to Forbes’ latest rankings) should come as no surprise. Studies of Obama’s personality conducted at the Unit for the Study of Personality in Politics show that, not unlike Putin and many other world leaders, Obama is an ambitious individual. However, the key difference between the personalities of Obama and Putin is an accommodating tendency on Obama’s part, in stark contrast to Putin’s strongly dominant personality pattern.

Accommodating leaders like Obama have a strong preference for negotiation over force.

Although this predisposition can be a net positive under some situations, when dealing with hard-nosed individuals such as Putin, it can spell trouble. The ambitious, controlling, opportunistic Putin is sure to take advantage of Obama’s accommodating nature.

Political-psychological studies suggest that putative 2016 presidential candidate Hillary Rodham Clinton may be better suited than Obama to deal with Putin.

Comparing Clinton and Obama head-to-head, it is evident both are highly ambitious. However, where Obama is accommodating, Clinton is highly dominant.

The political implication of this personality difference is that Clinton would likely deal with Putin from a position of strength and articulate her position bluntly and with clarity, while refusing to let Putin outmaneuver her.

Granted, one could argue Clinton’s personal style — specifically her tendency to be assertively uncompromising — would run the risk of adding fuel to the fire, escalating the standoff with Russia over its annexation of Crimea.

In reality, however, Clinton’s psychological profile underscores that she is a dutiful individual who would exercise due diligence in dealing with Putin and proceed prudently when playing hardball politics.

Putin, whose personality profile reveals a thin-skinned person who handles criticism poorly and becomes defensive, would be thrown off balance by the direct confrontation on which Clinton thrives.

Significant personality contrasts between Obama and Clinton offer insight into the political implications of their respective personal political styles. The politics of conciliation characteristic of Obama will likely wane in the next administration. Having been accustomed to the relative ease of dealing with the more conflict-averse Obama for the better part of a decade, Putin will be in for a rude awakening if Clinton is to hold the reins of power in the post-Obama era.

This is the opinion of Joe Trenzeluk, Inver Grove Heights, a junior psychology major at the College of St. Benedict and St. John’s University, where he is a summer research fellow in the Unit for the Study of Personality in Politics, directed by Aubrey Immelman.