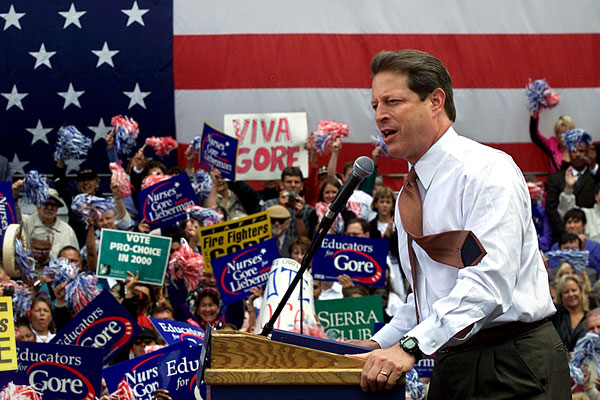 As America disentangles itself from the tinsel and icicle lights of another Christmas season, thoughts drift naturally toward the coming new year — college bowl games, parties, and the inevitable millennial New Year’s resolution.

Americans, this year, have additional food for thought: the Y2K computer glitch or “millennium bug.” The Y2K glitch, known to computer programmers for some time already, was not covered by mainstream media until the mid-1990s. Yet the problem is very real.

Last year, The National Journal devoted an entire issue to the subject, with headlines such as “The Big Glitch” and “Sorry, Al, This Bug’s for You.” In the special issue, Neil Munro cites a survey of industry and government executives and programmers concerning potential fallout from the millennium bug, showing that 70 percent anticipated a negative effect on the economy, with 10 percent of respondents not ruling out the possibility of economic depression and civil insurrection.

With a technology problem of this magnitude on the national horizon, where was the leadership of the nation’s No. 1 techno-nerd and self-proclaimed creator of the “information superhighway,” Vice President Al Gore?

Gore’s familiarity with and personal interest in technology, specifically computer technology, makes suspect his long silence on the Y2K issue.

In his biography, “Gore: A Political Life,” Bob Zelnick writes that Gore “had nothing to say during the first five-and-a-half years of his vice presidency about the biggest problem in the history of high-tech America.”

In January 1998, Congresswoman Constance Morella, R-Md., a driving force in government efforts to avert a Y2K disaster, asked Gore to lead the nation’s Y2K readiness effort. As reported in The National Journal, Gore declined, stating that such an enterprise would take up too much of his time.

According to a spokesperson, the vice president “does not remember that particular exchange but clearly, he was kidding.” Yet, within a month or so of the Morella encounter, Gore warned the president’s Cabinet that Americans would hold the White House responsible for any fallout from Y2K.

But it was not until October of last year, in a speech to the United Nations’ International Telecommunications Union in Minneapolis, that Gore publicly spoke out on the issue: “We must ensure that the international system is ready for the year 2000 — because one weak link in the system will hurt us all,” he said.

Given the urgency of the Y2K computer glitch, why was Gore — ever noted for his seriousness — silent for so long on this important matter?

Gore has often used the power of elective office to foster public awareness of technological and scientific issues. On the environmental soapbox in “Earth in the Balance,” Gore warns that global warming “threatens an environmental holocaust without precedent,” adding: “Today the evidence of an ecological Kristallnacht is as clear as the sound of glass shattering in Berlin.”

Ignoring for the moment Gore’s trademark overstatement, his enthusiasm is genuine. But if Gore can speak with such passion on a threat science has yet to substantiate, why has he dawdled in the face of a potential technological time-bomb, which, if nothing else, poses a more imminent threat than global warming?

Depending on one’s degree of cynicism, the underlying political motives for Gore’s silence could range anywhere from old-fashioned common sense to the kind of special-interest pandering for which Washington has become infamous.

In the former scenario, Gore may simply be acting out the role of an incumbent politician. Thus, his silence on the Y2K issue would reflect rational reluctance to undercut the peace-and-prosperity “If it ain’t broke don’t fix it” theme of his presidential campaign.

The more cynical interpretation of Gore’s stance, or lack thereof, would condemn Gore’s silence as an attempt to ingratiate himself with the deep pockets of Silicon Valley.

Although the human mind is much too inscrutable for pinpoint precision in political punditry, there are compelling clues in the complex interplay of personality and politics. What is it about Al Gore that would induce him to carry the torch for global warming while remaining mum on the millennium bug?

Gore’s most prominent personality patterns are conscientiousness and introversion, with a substantial measure of controlling dominance. This distinctive disposition yields telling insights into Gore’s characteristic cognitive style, or mode of thinking — how he focuses on issues, processes information, organizes his thoughts, and communicates ideas to others.

How, then, does Gore’s cognitive style explain his seemingly incongruent stances on global warming and the Y2K computer bug?

Gore’s sometimes fanatic defense of his position on global warming is congruent with the cognitive style of leaders with a controlling orientation.

Controlling personalities are characteristically opinionated; they are outspoken, adamant and unyielding. They hold strong beliefs, which they vigorously defend.

It is by no means out of character for Gore to speak strongly on global warming while the jury is still out on the scientific merits of his claims. Wrote Gore in his book: “We must act boldly, decisively, comprehensively and quickly, even before we know every last detail about the crisis. … Scientists may disagree, but we can hear Mother Earth crying.”

Gore’s silence on the Y2K bug, against the background of his vocal stance on global warming, also can be traced to the cognitive underpinnings of the conscientious component of his character. At its best, the conscientious pattern — even more prominent in Gore than his dominance — is marked by a circumspect, risk-avoidant mode; at its worst, by cognitive rigidity, unimaginativeness and a lack of vision.

Could it be that, in finally embracing the subject, Gore has simply followed the media? Or was it purely a matter of political expediency?

In a memo to members of Congress in May last year presidential hopeful Steve Forbes wanted to know, “What has the administration’s technology point man, Vice President Al Gore, been doing for the past five years?” Then-Speaker of the House Newt Gingrich responded, “I can’t imagine anything more destructive for Gore’s political future than to talk about the information superhighway and then to have the largest wreck in history on the first of January 2000.”

Gore has been commended for his ability to focus and to think reflectively and deeply (a common introversive trait) and for his unrelenting focus on the minutiae of public policy (a conscientious trait).

While the introversive mode of contemplation is a plus for leaders, overconscientious nitpicking can obliterate their comprehension of the bigger picture. The vice president may have initially ignored the potential seriousness of theY2K problem because he already had determined global warming to be the No. 1 technological, scientific problem facing America at the close of the millennium.

Having chosen his battleground, he has committed virtually the full force of his technological focus to his personal crusade to prevent “an environmental holocaust.”

Systematic study of the personality-politics nexus is an evolving discipline, but the relevance of this endeavor is far from academic. In technobabble, personality provides the human interface for policy-issue selection and information processing, and for political performance.

Quite simply, specific agendas and the ways they are addressed are influenced in myriad yet often predictable ways by the personalities of our elected leaders.

As for Y2K, one might half-expect Gore in time to declare, “I discovered a little problem, the millennium bug.”

Tom Lewandowski is a junior English/pre-med major from Omaha, Neb. Aubrey Immelman, associate professor of psychology at the College of St. Benedict and St. John’s University, directs the Unit for the Study of Personality in Politics.