A psychological analysis of former North Carolina Sen. John Edwards reveals that Edwards’ personality profile in key respects closely resembles that of Bill Clinton. The study, conducted in 2007-2008 by Anthony Odland, with additional data collection in spring 2010 by Brent Crawley, Katie Merkley, Andy Obritsch, Andrew Gustafson, David Wutchiett, Sean Wold, Steven Poppler, and Aubrey Immelman, Ph.D., at the Unit for the Study of Personality in Politics, identified Edwards’ primary personality patterns as Ambitious/self-serving and Outgoing/gregarious — a personality composite known as the “amorous narcissist” — with secondary features of the Dauntless/adventurous and Accommodating/cooperative patterns. 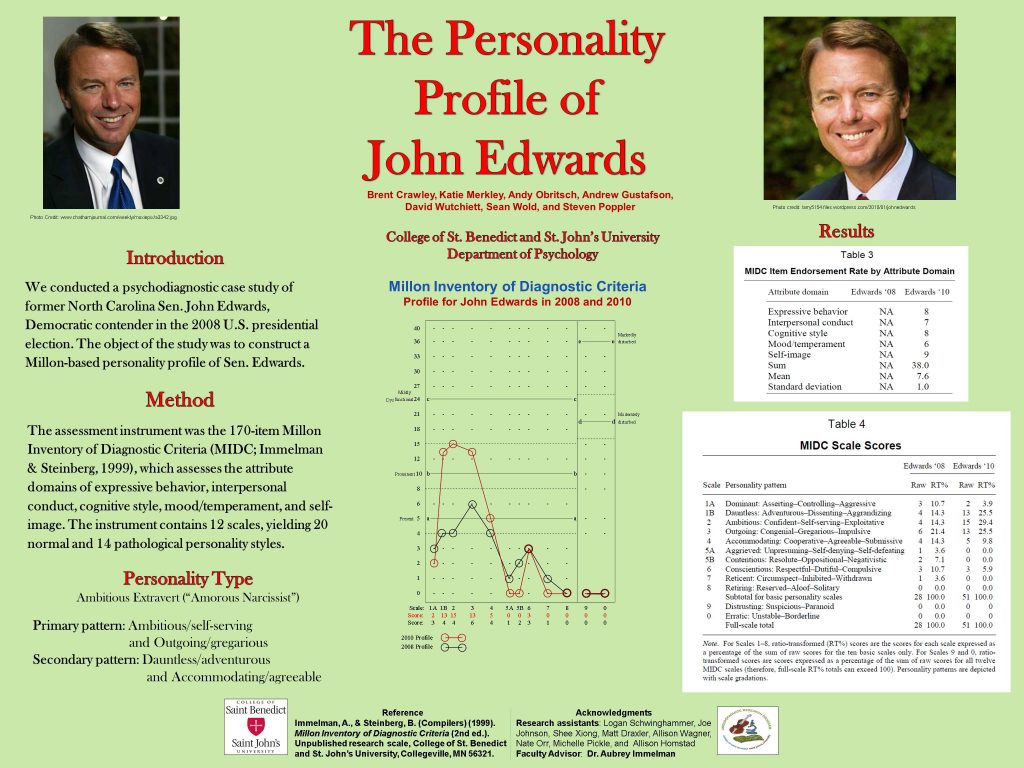 People with an Ambitious pattern are characteristically competitive, self-confident, audacious, bold, and clever. They are charming and skilled at winning others over to their causes and purposes, fully expect others to recognize their special qualities and cater to them, lack social reciprocity, and have a sense of entitlement. In extreme cases they may be viewed as exploitative and arrogant.

People with an Outgoing pattern are characteristically sociable, with a warm, likeable personal style. Though image-conscious and needing validation, they are confident about their social skills and their ability to charm and influence others. They tend to be easily bored with routine activities, are prone to shifting moods, and may be viewed as inconsistent or undependable.

People with a Dauntless pattern tend to flout tradition, dislike following routine, sometimes act impulsively and irresponsibly, and are inclined to elaborate on or shade the truth and skirt the law.

People with an Accommodating pattern tend to be considerate, cordial, and cooperative and are willing to reconcile differences to achieve peaceable solutions and to concede when necessary.

Leaders with an amalgam of Ambitious and Outgoing characteristics in their primary personality pattern — as does Edwards and, notably, former president Bill Clinton — are driven by a need for excitement, stimulation, and challenge. They are self-promoting and self-serving, motivated by a need for achievement and public recognition; are socially clever, charming, and skilled at attracting and seducing others; and display a tendency to be overly but transiently attached to one thing or person after another.

It is precisely this combination of primary personality traits that renders political leaders susceptible to scandal by contributing to neglect of the role demands of public office, low resistance to corrupting influences, and impulsiveness, as well as favoring loyalty and friendship over competence for the position in making political appointments.

Based on the assessment of his personality, it could have been foreseen that a worst-case scenario for John Edwards, had he been elected president in 2008, was his potential for committing errors of judgment stemming from a combination of strong ambition, a sense of entitlement, and inflated self-confidence; that he would have been predisposed to dissemble or equivocate, not only ego-defensively to bolster an admirable self-image, but instrumentally to have his way with others; that he would have had a strong need for approval and validation, along with a willingness to use his social skills to influence and charm others; and ultimately that he might have been neglectful of political role demands relating to oversight and prone to ethical fumbles or lapses of judgment, with the attendant failure to guard protocol and morality against violation and physical resources against improper and unwarranted use.

John Edwards enters the Federal Building in downtown Winston-Salem, N.C., on Friday, June 3, 2011. A grand jury indicted the two-time presidential candidate on Friday, accusing him of trying to protect his political ambitions by soliciting and secretly spending more than $925,000 to hide his mistress and their baby from the public. (Photo credit: Jennifer Rotenizer / AP)

RALEIGH, N.C. — Former presidential hopeful John Edwards pleaded not guilty Friday to federal charges that he solicited and secretly spent more than $925,000 to hide his mistress and their baby from the public at the height of his 2008 White House campaign.

In a 30-second statement to dozens of reporters and television news cameras that surrounded him outside the courthouse, he said he never thought he was breaking the law. …

The indictment contained six felony counts, including conspiracy, four counts of receiving illegal campaign contributions and one count of false statements for keeping the spending off the campaign’s public finance reports.

It said the payments made with money from two wealthy supporters were a scheme to protect Edwards’ presidential ambitions. …

If convicted, Edwards faces a maximum penalty of five years in prison and a $250,000 fine on each of the six counts. First-time white collar offenders usually don’t receive prison terms in federal court, but the Justice Department typically presses for at least short prison sentences for public officials. While Edwards was a private citizen as a candidate, he was receiving taxpayer money for his presidential campaign.

The indictment was the culmination of a federal investigation begun by the FBI more than two years ago that scoured virtually every corner of Edwards’ political career, including his time as a U.S. senator, which ended seven years ago.

But the centerpiece has been the hundreds of thousands of dollars privately provided by two wealthy supporters — former campaign finance chairman Fred Baron and Rachel “Bunny” Mellon, the 100-year-old widow of banking heir Paul Mellon. That money eventually went to keep mistress Rielle Hunter and her out-of-wedlock baby in hiding in 2007 and 2008, during the apex of the Democratic nomination campaign. …

The conspiracy count accused Edwards of lying when he admitted to the affair during an interview on ABC but denied knowing about any payments. “I’ve never asked anybody to pay a dime of money, never been told that any money has been paid,” he said.

The indictment referred to Edwards’ discussions with a former employee in summer 2009 in which they prepared a statement to the media in which he would admit he was the father of Frances Quinn Hunter. …

Edwards and Hunter began their relationship in 2006, just as the 2004 Democratic vice presidential nominee was plotting a second run for the White House. …

Edwards initially denied having an affair with Hunter but eventually admitted to it in the summer of 2008. He then denied being the father of her child before finally confessing last year.