The president has asked his former campaign manager, David Plouffe, to oversee House, Senate, and governor’s races to stave off a hemorrhage of seats in the fall. (Photo credit: Paul J. Richards / AFP – Getty Images file)

Obama Moves to Centralize Control Over Party Strategy (Jeff Zeleny and Peter Baker, New York Times, January 23, 2010) — President Obama is reconstituting the team that helped him win the White House to counter Republican challenges in the midterm elections and recalibrate after political setbacks that have narrowed his legislative ambitions. … Full report

The return of the neocons (David Margolick, Newsweek, Jan. 22, 2010) — Neoconservatism was once deemed dead – ‘Buried in the sands of Iraq.’ But it persists, not just as the de facto foreign-policy plank of the Republican Party but, its proponents assert, in Obama’s unapologetic embrace of American military might. (From the magazine issue dated Feb. 1, 2010)

THE POLITICAL PSYCHOLOGY OF BARACK OBAMA 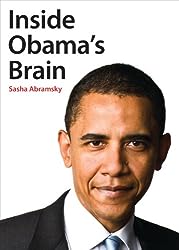 Book review: ‘Inside Obama’s Brain,’ by Sasha Abamsky (Steven Levingston, Washington Post, Feb. 14, 2010) — Sasha Abramsky promises us a glimpse in “Inside Obama’s Brain.” He tells us right away what his book is not: It’s not a biography, not political history, not inside-the-Beltway prattle. It is, he says, “a psychological profile writ large.” … By the end of the book, Abramsky admits he hasn’t discovered any one thing that explains the question he set out to answer: “What makes Barack Obama tick?” Obama, he realizes, is — guess what? — “a powerfully driven man, ambitious, intelligent, and charming.”

Alone in a crowd: When cool comes off as cold (Jacob Weisberg, Newsweek, Jan. 22, 2010) — How Barack Obama connects to people is the opposite of a Clinton, a Bush or a Ronald Reagan. Think Lincoln or Carter. (From the magazine issue dated Feb. 1, 2010)

The study offers an empirically based framework for anticipating Obama’s performance as chief executive. The following general predictions regarding Obama’s likely leadership style can be inferred from his personality profile:

Aubrey Immelman, PhD, associate professor of psychology at the College of Saint Benedict/Saint John’s University in Minnesota, says the variable that most distinguishes Obama from the two previous presidents is conscientiousness – one of the “big five” personality factors in standard psychology (everyone has all five, in differing degrees; the others are openness to experience, extroversion, agreeableness, and neuroticism).

People who score high on the conscientiousness scale (as determined by several personality inventories) are dependable, orderly, self-disciplined, achievement oriented, cautious, industrious, and deliberate – the type who could, say, run a masterfully efficient political campaign, exercise daily, even while on the road, and make methodical decisions. (Those who score low tend to be careless, irresponsible, disorganized, and unreliable.)

Indeed, a 2000 study from the journal Assessment suggests that when it comes to presidents, conscientiousness is associated with greatness: George Washington, Woodrow Wilson, Dwight Eisenhower, and Harry Truman (all of whom historians rank among the country’s foremost leaders) scored in the 90th percentile and above for the trait, based on inventories completed by biographical experts. Thomas Jefferson and Abraham Lincoln were solidly conscientious (78th and 75th percentile); Bill Clinton and John F. Kennedy, however, came in at the 5th percentile. … Full report

Sarah Moore and Angela Rodgers present their research on “The Personality Profile of President Barack Obama: Leadership Implications” in the State Capitol rotunda, St. Paul, Minn., Feb. 19, 2009. The research, conducted at the Unit for the Study of Personality in Politics, was directed by Aubrey Immelman, Ph.D. 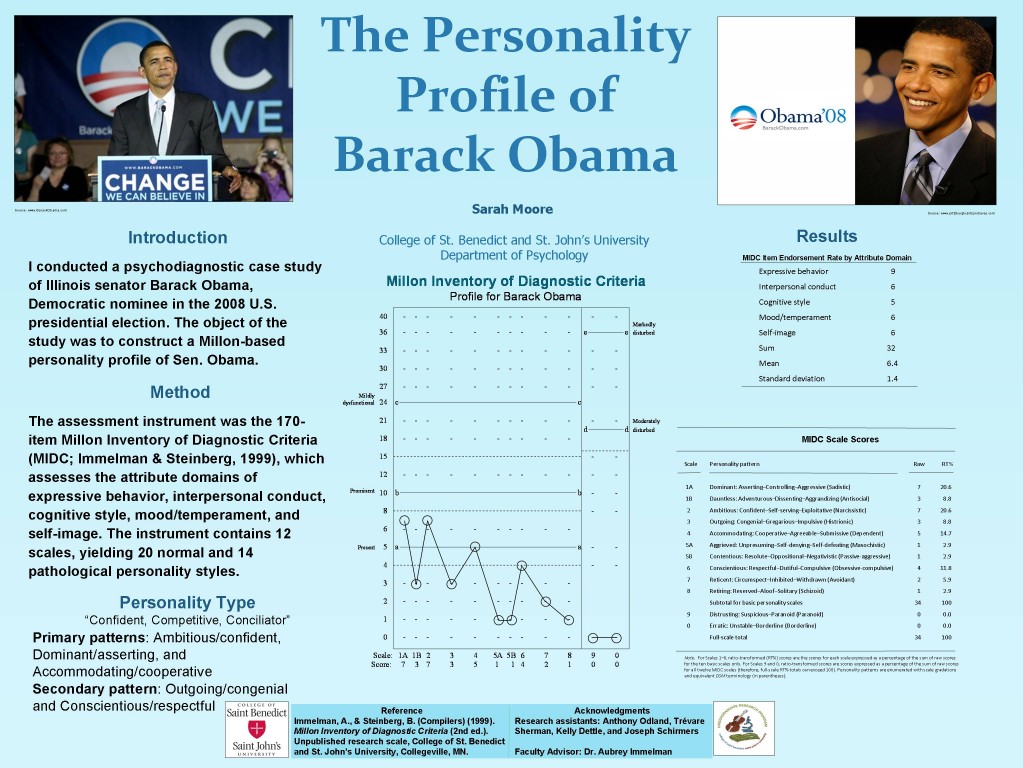 Sen. Barack Obama: Is He Tough Enough? (Aubrey Immelman, St. Cloud Times, Nov. 1, 2008) — Among the many leaders I have studied – presidential candidates as well as foreign adversaries as a consultant to the U.S. military – Barack Obama is something of a rarity. … Read more