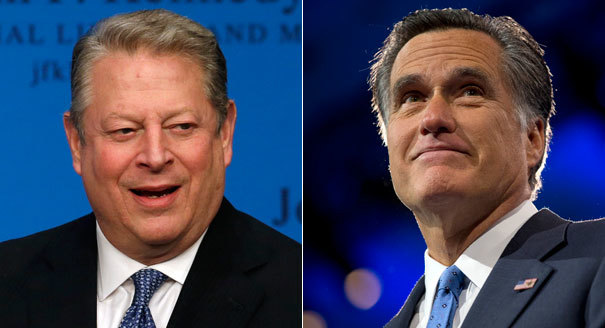 Following Mitt Romney on the campaign trail is a painful yet familiar experience.

Painful, because of the wince-inducing moments when you realize that, for all of Romney’s success in imitating human attributes, there remain glitches in the matrix that reveal him to be different from the rest of us.

In the past few days alone, he claimed to take pleasure in firing people, expressed his phony fears about getting a “pink slip” from the job that swelled his wealth to nearly a quarter-billion dollars and asserted misleadingly that he worked an “entry-level” job after Harvard Business School.

Romney further alleged that “I never thought I’d get involved in politics” — though he has been in politics for two decades. And he claimed that he didn’t seek reelection as Massachusetts governor because “that would be about me” — as if running for president, which he did instead, was a gesture of sacrifice and altruism.

Romney, the conservative writer Jonah Goldberg argued this week, has an “authentic inauthenticity problem.” And that is precisely why his struggle is so familiar. He is the political reincarnation of Al Gore, whose campaign I covered with an equal amount of cringing a dozen years ago.

To see Romney, in his Gap jeans, laughing awkwardly at his own jokes and making patently disingenuous claims, brings back all those bad memories of 2000: “Love Story.” Inventing the Internet. Earth tones. Three-button suits. The alpha male in cowboy boots. The iced-tea defense. The Buddhist temple. The sighing during the debate.

It’s familiar, as well, to Michael Feldman, a longtime Gore aide who watched his boss get undone by the inauthentic label. “When an impression like that hardens, you’re communicating into a stiff wind,” he told me. “These caricatures can form impressions that are really hard to turn around.”

If anything, Romney’s problem is greater than Gore’s because it is rooted in his frequent repositioning on issues such as abortion, gay marriage and health care. In substance, Romney’s troubles may turn out to be closer to John Kerry’s: As my colleague Greg Sargent has written, the undermining of Romney’s business acumen by the attacks on his work at Bain Capital is similar to the undoing of Kerry’s record as a Vietnam War hero by the Swift Boat Veterans for Truth. …

But in temperament and style, Romney is closest to Gore, another politician’s son from Harvard with pedantic tendencies who, in public, never quite seems comfortable.

The media tend to assign each candidate a character flaw as a form of shorthand (John McCain was volatile, George W. Bush was dopey, Obama is all talk). Ominously, Romney’s descriptions are the same applied to Gore 12 years ago: assuming “personas,” going through “makeovers,” attempting “regular-guy” traits, exhibiting “robotic” behavior and issuing new versions, such as “Romney 3.0.”

For Romney, the problem now becomes that reporters, and opponents, are perpetually on the lookout for new examples to add to his dossier of awkwardness. “It’s a self-perpetuating cycle,” explained Chris Lehane, who sought, with limited success, to help Gore defy his “wooden” image. “You’re trying so hard to think through what you’re going to say that you get mental handcuffs every time you speak. You’re so nervous about the archetype that you fall into the archetype.”

In Romney’s case, there is already abundant support for the archetype: his belief that “corporations are people,” his talk about hunting “small varmints,” the story about driving with the family dog in a kennel strapped atop the Romneys’ car, his attempted $10,000 bet with Rick Perry, his singing “Who let the dogs out?,” his pretending to be pinched on the behind by a waitress, his bizarre jokes about Hooters and hollandaise sauce, and his tendency to ask debate moderators for protection from his opponents.

None of those is, by itself, disqualifying — and, as in Gore’s case, not all the examples are fair. But, combined with Romney’s frequent fluctuations on the issues, his awkwardness has left an impression that he is a phony and not to be trusted. Romney isn’t necessarily doomed — Gore, after all, received more votes than the other guy — but this much seems clear: Over the next 10 months, Romney will be getting the Gore treatment.

Full story and reader comments at the Washington Post