Can New York Mayor Rudy Giuliani Compromise Despite His Aggressiveness and Moral Certitude?

By Joshua Jipson and Will Piatt
St. Cloud Times
December 12, 1999 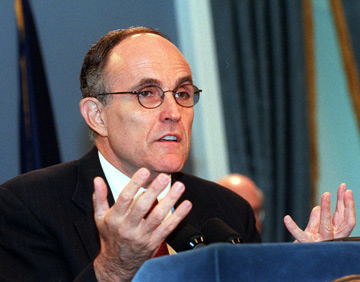 What happens when a schoolyard bully, so to speak, moves up to boarding school?

Regardless of the state in which they are elected, senators are powerful players on a national stage; their political performance, ultimately, affects us all.

At issue, then, is how to predict performance in public office. Our answer: Extrapolate from ingrained personality patterns and past performance.

The dominant feature of Rudy Giuliani’s personality is a controlling, aggressive tendency, which is an attribute instrumental in his past political successes.

During his tenure in the mayor’s office, Giuliani has crusaded vigorously to reduce crime and clean up the streets of New York City. However, in doing so he has berated critics and tormented subordinates not acting fully in accordance with his wishes.

In politics, a combative, crusading political personality can contain the seeds of its own undoing. If past behavior is any indicator of future performance, a Senator Giuliani in short order will embroil himself in controversy.

Conscientiousness, the other prominent element of Giuliani’s personality, provides the underpinnings for honesty, integrity, and strong adherence to moral principle.

But it also can cultivate compulsiveness — and Giuliani seems compelled to attend personally to every detail of a pet project.

A prime example is his micromanagement of New York City’s police department. The U.S. Senate, however, is no place for pouncing on pesky squeegee men and harassing the homeless.

As mayor, Giuliani has been known to veto a budget over minor disagreements, sacrificing broader policy objectives purely to maintain his pride. But functional democracy requires compromising here and forfeiting a contest there, all in the service of progress toward a larger goal. Should Giuliani perpetuate his contentious pattern in the Senate he will merely serve as a personal road block, obstructing the path to his own political success.

Our main concern with Giuliani is his larger personality configuration. When a prominent aggressive tendency combines with moral certitude, the resulting personality prototype is the “hostile enforcer.”

These personalities often act as though they have a monopoly on divining right and wrong, believing it is their duty and obligation to punish and control. Giuliani justifies such behavior with the rationale, “The big dog’s gotta eat.”

Giuliani may be the biggest dog in New York City, but if elected to the Senate, he’ll have 99 fellow political pooches of like proportions. As surely as the sun rises, some of those senators will cross swords with Giuliani. Simply browbeating or bullying them away, as has been the mayor’s habit, will no longer be an option.

But as president, his hostility would have global implications. Diplomacy, a vital tool in foreign policy, is not a prevalent trait in personalities such as Giuliani’s.

Case in point: At a 1995 function jointly sponsored by the City of New York and the United Nations, Giuliani stood on-stage at Lincoln Center and ordered Palestinian Authority chairman Yasser Arafat to leave the theater.

Apparently, Giuliani tried to curry favor with the strong Jewish community in the city — a constituency that is key to his political fortunes.

Recently, the New York Observer asked, “Can Rudy Giuliani tame the beast within?” Let’s hope he can, for should he fail, the fire he spouts may scorch not only Washington, but instigate a larger conflagration.

If the firebrand Giuliani is to take another step up the political ladder, he must curtail his aggressive impulses and appreciate that sometimes — even at the pinnacle of power — discretion is the better part of valor.

Joshua Jipson is a sophomore English major from Lakeside, Wis. Will Piatt is a sophomore communication major from Monticello, Ill. Aubrey Immelman, associate professor of psychology, contributed to this article.