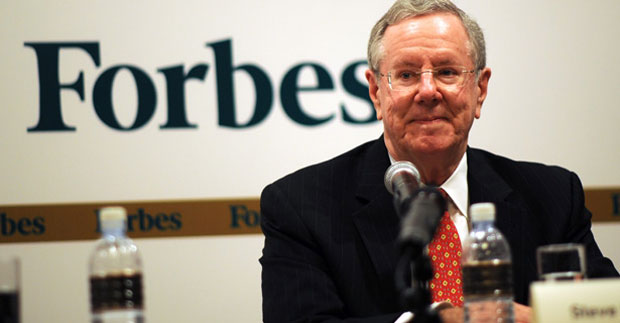 America likes to pick accomplished politicians for president. For most voters in 2000, General Dwight D. Eisenhower — the most recent exception to that rule — is known only as an historical figure.

Thus, few Americans were surprised when Steve Forbes’ poor performance in the recent New Hampshire primary proved to be the beginning of a quick spiraling end to the presidential hopes of the magazine publisher, whose prospects came crashing to the ground just a few days later with his dismal showing in Delaware — a state he had won in 1996.

For most Americans, Forbes’ decision to pull the plug on his campaign was mere formality, not a stop-the-press event. Though few bothered pausing to ponder why he withdrew, Forbes himself nailed the bull’s eye in pinpointing the reason for his failed bid when he said, “After what has happened in the last seven years in this town with the Clinton-Gore administration, people are looking for biography, for character.”

Perhaps Forbes was unaware that what we hold as character — with apologies to the framers of our Constitution — is no self-evident truth.

Forbes may have been technically correct in pinpointing people’s yearning for character, but in a cultural sense he missed the point. In contemporary politics it is charisma and showmanship that resonate with the media and fuel political popularity — characteristics classically unrelated to trustworthiness, sincerity, and other qualities voters claim to search for in a president, yet paradoxically equated with character.

Character has little to do with the polished veneer of pleasant sociability and idealistic concern that comes so easily to accomplished politicians. Character, fundamentally, is about deeply etched, ingrained personality traits.

Unfortunately for Forbes, the external trappings of his character were unlikely to galvanize today’s typical voter.

But the news gets worse for the hapless Forbes. Beyond the public’s frequently flawed perception of character, electoral success today is a function of a new, emerging social trend: the culture of celebrity.

In putting a positive spin on his failed bid for the presidency, Forbes surely missed the mark with this wistful article of faith: “In a few weeks I think they’ll start to focus more on principles and on particular issues.”

Forever the magazine editor, Forbes centered his whole campaign on issues, content, and substance. No doubt, he had hoped to make his mark by setting the agenda. However, in this media-crazed era with its entertainment-industry standards, content simply doesn’t fly.

Forget that Forbes’ issues may be consequential; these are simply not matters at the heart of the majority of the American people. Most voters do not know what supply-side economics is, let alone hear it endlessly promoted by someone most of them find about as bland as a blank chalkboard.

The ancient Greek philosopher, Heraclitus, said that “character is destiny,” and our assessment of Steve Forbes reveals a character dominated by conscientious and reticent, or inhibited, personality traits.

Conscientious personalities are conventional, orderly, respectful of tradition and authority, well organized and reliable, diligent about responsibilities, and unbending in their adherence to social proprieties.

But they appear pedestrian, stiff, and boring — anything but imaginative or inspirational, and certainly do nothing to draw an apathetic populace in their droves to polling places.

So, while Forbes’ conscientious traits portend trustworthiness and sincerity, his political marketability is tarnished by precisely those qualities that ordinarily would be considered emblematic of strength of character.

As if this were not enough, Forbes’ lack of viability as a candidate is compounded by another governing personality pattern, namely social inhibition.

Reticent personalities are typically shy and sensitive to social indifference or rejection — which does not play in politics. In these times, stiff formality compounded by social awkwardness is a fairly certain formula for a failed campaign.

Thus, beyond the incontrovertible fact that we prefer an experienced politician for president, Forbes’ fate was sealed by the sheer political force of personality.

As a candidate, Steve Forbes was a vocal proponent of a flat tax. But we, the people, perceived someone who, as a presidential contender, was simply flat.

Matt Tinguely is a senior biology/pre-med major from Harwood, N.D. Kelila Kasim is a first-year political science major from Seattle, Wash. They are collaborating in leadership studies conducted by Aubrey Immelman, associate professor of psychology at the College of St. Benedict and St. John’s University, in the Unit for the Study of Personality in Politics.