Electoral Map Is a Reality Check to Donald Trump’s Bid

Electoral Map Is a Reality Check to Donald Trump’s Bid 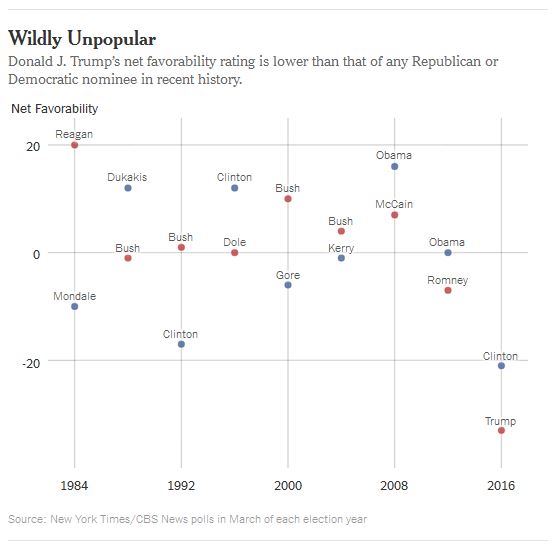 By Jonathan Martin and Nate Cohn

In recent head-to-head polls with one Democrat whom Mr. Trump may face in the fall, Hillary Clinton, he trails in every key state, including Florida and Ohio, despite her soaring unpopularity ratings with swing voters.

In Democratic-leaning states across the Rust Belt, which Mr. Trump has vowed to return to the Republican column for the first time in nearly 30 years, his deficit is even worse: Mrs. Clinton leads him by double digits in Wisconsin, Michigan and Pennsylvania.

Mr. Trump is so negatively viewed, polls suggest, that he could turn otherwise safe Republican states, usually political afterthoughts because of their strong conservative tilt, into tight contests. …

But without an extraordinary reversal — or the total collapse of whoever becomes his general-election opponent — Mr. Trump could be hard-pressed to win more than 200 of the 270 electoral votes required to win.

Mr. Trump has become unacceptable, perhaps irreversibly so, to broad swaths of Americans, including large majorities of women, nonwhites, Hispanics, voters under 30 and those with college degrees — the voters who powered President Obama’s two victories and represent the country’s demographic future. …

“There is no precedent for this,” said Neil Newhouse, a veteran Republican pollster. “In the modern polling era, since around World War II, there hasn’t been a more unpopular potential presidential nominee than Donald Trump.” …

Nationally, Mrs. Clinton leads Mr. Trump by about 10 percentage points in most head-to-head polls — the widest margin at this point in a presidential campaign in 16 years.

If Mrs. Clinton somehow loses the Democratic race — unlikely given her delegate advantage — Mr. Trump could fare even worse in a general election against Senator Bernie Sanders of Vermont, who has higher margins than Mrs. Clinton in head-to-head polling against Mr. Trump in most swing states. …

A version of this article appears in print on April 3, 2016, on page A1 of the New York edition with the headline: Electoral Map a Reality Check to a Trump Bid.

Read the full report at the New York Times