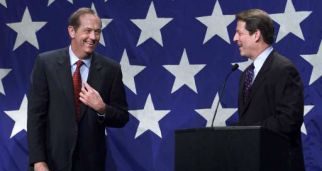 In basketball, it’s common to find two post players fighting their own personal battle down on the block. They push, shove, and elbow each other while fighting for position.

The intensity of these battles varies: sometimes the adversaries remain respectful and relatively clean, while at other times they degenerate into parquet pugilists.

In the latter kind of confrontation, the necessary course of action for competitors is simple: get tough or get beat. This situation can be likened to political campaigning.

In his unsuccessful quest for the Democratic nomination, Bill Bradley did not possess the killer instinct to respond quickly and effectively to Al Gore’s negative attacks; lacking the requisite toughness, he “got beat.”

On Super Tuesday, what for weeks had been the writing on the wall of Bradley’s political prospects, became grim reality: he had been weighed and found wanting as a Democratic presidential nominee. In the end, Bradley’s prompt withdrawal from the race after failing to win a single caucus or primary was mere formality.

Although Bradley no longer is a contender in the 2000 presidential election, his ineffectiveness as a candidate makes an important statement about presidential politics in the new millennium. Last fall, polls in key states put Bradley in a dead heat with Gore, and late last year some pundits were predicting a Bradley win in New Hampshire.

What went wrong? The conventional wisdom is that the charismatic John McCain, with his compelling life story, sucked the air from Bradley’s insurgent campaign. While this may well be true, greater scrutiny is needed, focusing on Bradley — not McCain.

Bradley and Gore, both introverts, have a strong conscientious personality component. Conscientious personalities are diligent, responsible, and reliable, but prudent, plain, and pedestrian. In a political era where celebrity and charisma are two critical ingredients in the recipe for electoral success, both Democrats are bland to a fault.

But if so little distinguishes the two in personality and popular appeal, why did voters overwhelmingly go for Gore? Al Gore had the formal backing of the national Democratic Party organization, and perhaps one need look no further in explaining Bradley’s quick demise.

However, we believe personality played a crucial role. Our assessment of Bill Bradley last fall revealed that the character quality that most clearly distinguished him from Gore was a distinctively accommodating, conciliatory tendency.

According to personality theorist Theodore Millon, accommodating personalities have a strong need to reconcile differences, conceding when necessary. Cordiality and compromise characterize their interpersonal relationships. They are humble and uncritical, and gracious — even with respect to adversaries and people that they do not like.

Based on that evaluation, Matt Tinguely and Tom Lewandowski in their Dec. 19 CSB/SJU political candidate profile of Bradley and Gore, asserted that “Gore is more predisposed to negative campaigning and personal attacks than Bradley, and also more relentless and unforgiving.” But they noted, “the rules of engagement of presidential politics practically guarantee a reciprocal response on the part of Bradley.”

“Practically” proved to be the operative word; Bradley’s half-hearted, reluctant response to Gore’s pounding in the run-up to the New Hampshire primary resembled nothing so much as a thoroughly trounced basketball team’s futile attempt to recover from a 20-point deficit late in the fourth quarter: too little, too late.

Bill Bradley’s exit from the presidential race is a prime example of a candidate taking the high road to nowhere. His personality figured significantly in his reluctance to engage Al Gore in a muddy campaign — and thus, his downfall.

What this tells us about our present-day political preferences is that we like to see some fire in our leaders — as Jesse Ventura voters in Minnesota’s 1998 gubernatorial election will attest.

But there’s more. To neutralize the inherent advantage of Gore’s official party support, Bradley needed more than a command of the issues — he needed to command people’s attention.

The problem is that in contemporary politics it is charisma that resonates with the media and fuels political popularity. As Tinguely and Lewandowski wrote, introverts like Bradley “lack the connect-with-people charisma and self-promoting affinity necessary to achieve higher office” in modern presidential politics — a trend that did “not bode well for Bradley’s candidacy,” as they delicately phrased Bradley’s dilemma.

Ultimately, Bradley’s failure as a candidate was unremarkable, given his underlying personality pattern. But of greater note is this: Given the similarity between the introverted, conscientious personality styles of Gore and Bradley, Bradley’s fate in the primaries could be an ill portent of Gore’s own bitter cup, come November.

Aubrey Immelman, associate professor of psychology at the College of St. Benedict and St. John’s University, directs the Unit for the Study of Personality in Politics. Josh Jipson is a sophomore English major from Lakeside, Wis.