Gore-Bradley nomination battle will be far from boring 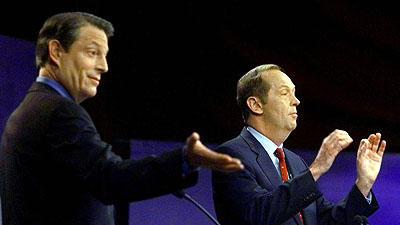 True introverts are uncommon in modern presidential politics. They lack the connect-with-people charisma and self-promoting affinity necessary to achieve high public office in these times.

The contest for the 2000 Democratic nomination between Al Gore and Bill Bradley is anomalous in that, for top-tier politicians, both contenders are uncommonly reserved. Gore is more so than Bradley, who is less campaign-challenged in this regard. Beyond their introversion, both are highly conscientious. The presence of two such similar personalities on the presidential campaign trail can have some unexpected implications.

The personal parallels between Vice President Gore and Sen. Bradley are nicely captured in a recent article in Rolling Stone, which described both candidates as “smart and serious, intellectually intense and painfully earnest. Both are capable, both cautious.”

Seriousness, earnestness, and prudence are emblematic of the conscientious character. Like the introversion dimension, conscientiousness exists on a continuum, and of the two men Gore’s orientation is the more pronounced.

Exaggerated variants of this style are revealed in perfectionistic tendencies, fastidiousness, and excessive devotion to productivity; in more moderate measure, these personalities are merely organized, controlled, and disciplined.

Conscientious personalities, furthermore, are courteous, proper, and polite, sometimes to a fault, displaying reasonableness and restraint in situations that may prompt anger in others.

In short, none of these characteristics suggests that either the vice president or the former basketball star is prone to fiery put-downs; and, indeed, both candidates have voiced the express intent to run a clean campaign.

Consistent with our assessment of Bradley and Gore as conscientious introverts, both men have been described as dignified, reserved intellectuals with a sense of duty, but politically handicapped by a somewhat boring, wooden demeanor.

On the face of it, one would expect a dignified, issue-orientated race for the Democratic nomination, unsullied by mudslinging and personal vindictiveness. Ironically, the very similarity of the candidates portends a negative campaign.

In the absence of clear distinctions it is inevitable that observers will magnify minor differences between the candidates. Thus, as we approach the primary season, we expect tiny distinctions between Gore and Bradley to be scrutinized by the media and selectively highlighted by the candidates themselves.

Political psychology offers unique insights in this regard.

Given the similarity of their primary conscientious, introverted personality patterns, the sharpest contrast between the candidates will be conveyed on the campaign trail by the subtle moderating effects of secondary personality patterns. In this regard, Bradley has strong accommodating tendencies, whereas Gore is a controller.

With reference to Bradley, a conscientious pattern tinged with accommodating traits is characteristically duty-bound, scrupulous, and placating; these personalities may be troubled by hesitance and self-doubt, usually evident in a tendency to underplay their abilities and accomplishments.

In the case of Gore, conscientious controllers harbor greater hostility, typically shrouded in righteous indignation. And, of course, they have a penchant for exaggerating their abilities and accomplishments — reflecting, in part, a deep-seated need to assert their moral rectitude.

Our psychological analysis suggests that Gore is more predisposed to negative campaigning and personal attacks than Bradley, and also more relentless and unforgiving. That said, the rules of engagement of presidential politics practically guarantee a reciprocal response on the part of Bradley.

The attacks have already begun. The vice president has called the former New Jersey senator a quitter in reference to his stepping down after the Republicans took control of Congress in 1994.

In response, Bradley stated that he would not demean his opponent. But he acknowledged, “The rule of thumb among political consultants is that negative campaigning works, and therefore, if you don’t do it, you’re toast.” He then issued this thinly veiled threat: “I know from basketball that you can only take elbows for so long before you have to give them back.”

Gore’s preemptive first strike was presaged by his more dominant, aggressive orientation, and Bradley’s reluctance to retaliate by his accommodating, conciliatory tendency. Bradley for the most part has lived by the age-old adage to turn the other cheek. Which prompts the question: How much cheek does Bradley have?

Matt Tinguely is a senior biology/pre-med major from Harwood, N.D. Tom Lewandowski is a junior English/pre-med major from Omaha, Neb. They are participants in the “Psychological Assessment of Presidential Candidates” course being taught this fall by Aubrey Immelman, associate professor of psychology, at the College of St. Benedict and St. John’s University. Theresa Galles, sophomore Spanish major from Roseville, Minn., contributed to this article.