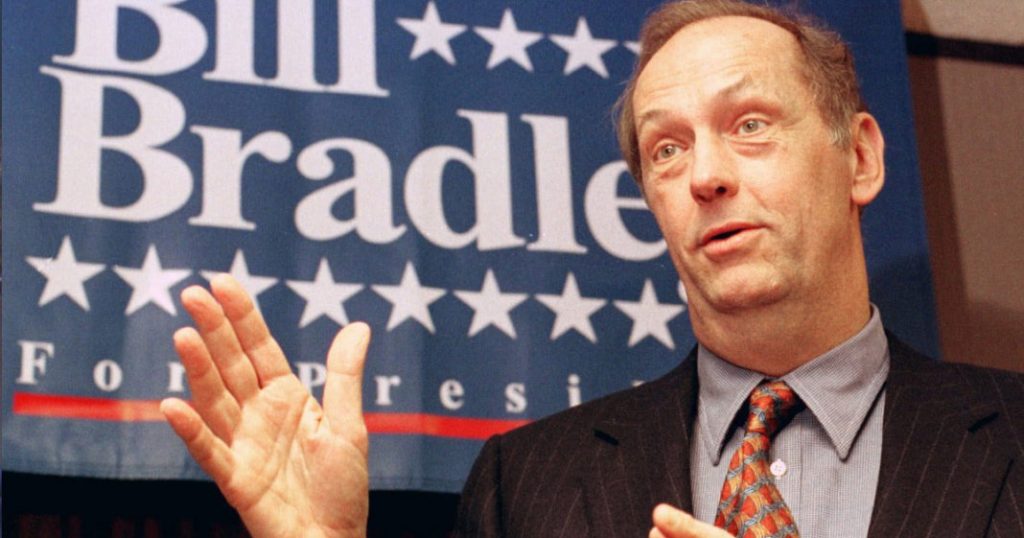 With the Iowa caucuses and New Hampshire’s first-in-the-nation presidential primaries fast approaching, the pace on the campaign trail is heating up, with Bill Bradley resolutely closing in on the leaders of the pack.

Yet much of the voting public knows little about Bradley, the former NBA star and New Jersey senator. A peek into Bradley’s personality and wide-ranging achievements offers illuminating insights.

Bradley is the consummate achiever — not by virtue of breeding or privilege, but on the strength of his own talents, principles, and perseverance.

Scores of college basketball scholarship offers notwithstanding, Bradley chose to attend Princeton University, which offered no athletic scholarships but produced more Rhodes Scholars than the other institutions on his list. He succeeded enormously in both basketball and academics. In his senior year he won a Rhodes Scholarship to Oxford and — as a member of the U.S. basketball team — a gold medal at the 1964 Tokyo Olympics.

In what must seem iconoclastic to today’s young voter in this era of increasing sports fanaticism, Bradley lugged along to training camp and Tokyo his Princeton texts — among their number a tome on Russian history.

Bradley put his NBA career on hold to complete his Oxford studies, then returned to the United States to join the Air Force Reserves and the New York Knicks. During his decade with the Knicks, he won two NBA titles, in 1970 and 1973.

After retiring from pro basketball in 1977, Bradley successfully ran in New Jersey as a Democrat for the U.S. Senate. He was re-elected in 1984 and 1990, retiring from the Senate in 1996.

Impressive as Bradley’s achievements are, one has to look beyond personal history to discern what kind of a president so accomplished a person would make.

Bradley’s 1996 memoir “Time Present, Time Past,” offers revealing glimpses into these enduring personality traits. In the book, Bradley describes himself as a “workhorse” rather than a “showhorse” senator and offers the following account of his self-imposed basketball-training regimen: “I stayed behind to practice after my teammates had left. My practice routine was to end by making 15 baskets in a row from each of five spots on the floor.”

In these solitary, self-disciplined qualities Bradley closely resembles Vice President Al Gore; indeed, of all the presidential contenders, Bradley and Gore most closely resemble each other in terms of underlying character.

The combination of introverted equanimity and a conscientious, almost compulsive work ethic in Bradley’s personality have produced a focused, goal-directed man who is highly successful at whatever he chooses to do.

Although Gore also possesses these qualities in large measure, his social reserve is more acute, which feeds his social awkwardness and contributes to a tone-deaf political tin ear.

Where Gore’s personality is marked by an undercurrent of controlling dominance, Bradley has a distinctively accommodating, conciliatory tendency.

While the accommodating personality pattern is something of a rarity among 20th century American presidents — William Taft, Warren Harding, and Jimmy Carter — it has featured prominently in earlier studies of Eleanor Roosevelt and South African presidents F. W. de Klerk and Nelson Mandela.

According to personality theorist Theodore Millon, accommodating personalities can reconcile differences and concede when necessary. Cordiality and compromise characterize their interpersonal relationships. They are warm and congenial, humble and uncritical, and gracious, even to those that they dislike. These are the qualities that most distinguish Bradley from all the other presidential contenders.

Should Bradley be elected president, he would undoubtedly work tirelessly to accomplish his goals.

A potential weakness in presidential performance for Bradley is his introversion, though it is less acute than is Gore’s. Few modern presidents — only Calvin Coolidge, Herbert Hoover, Richard Nixon, and Jimmy Carter in the past century — have been introverted, and these have generally been rated failures.

Outgoing, charismatic presidents, in contrast, have shown a knack for galvanizing the public — witness the two Roosevelts, Kennedy, Reagan, and Clinton.

This trend does not bode well for Bradley’s candidacy. However, some political commentators speculate that the country is suffering from “Clinton fatigue,” asserting that voters may be tired of flashy, outgoing presidents who ultimately fail to deliver what they promise in their campaigns.

We believe the notion of Clinton fatigue is a hugely overblown inside-the-Beltway media creation, but if it really exists, Bradley would be its prime beneficiary — both in the Democratic primaries, where he faces the No. 2 man in the Clinton administration, and in the November election, where his opponent likely will be the outgoing, somewhat Clintonesque George W. Bush or the similarly extraverted John McCain.

Katie Conlin is a sophomore peace studies major from St. Paul, Minn. Kara Hansen is a sophomore computer science and mathematics major from St. Joseph, Minn. They participated in the “Psychological Assessment of Presidential Candidates” course taught last fall by Aubrey Immelman, associate professor of psychology, at the College of St. Benedict and St. John’s University.