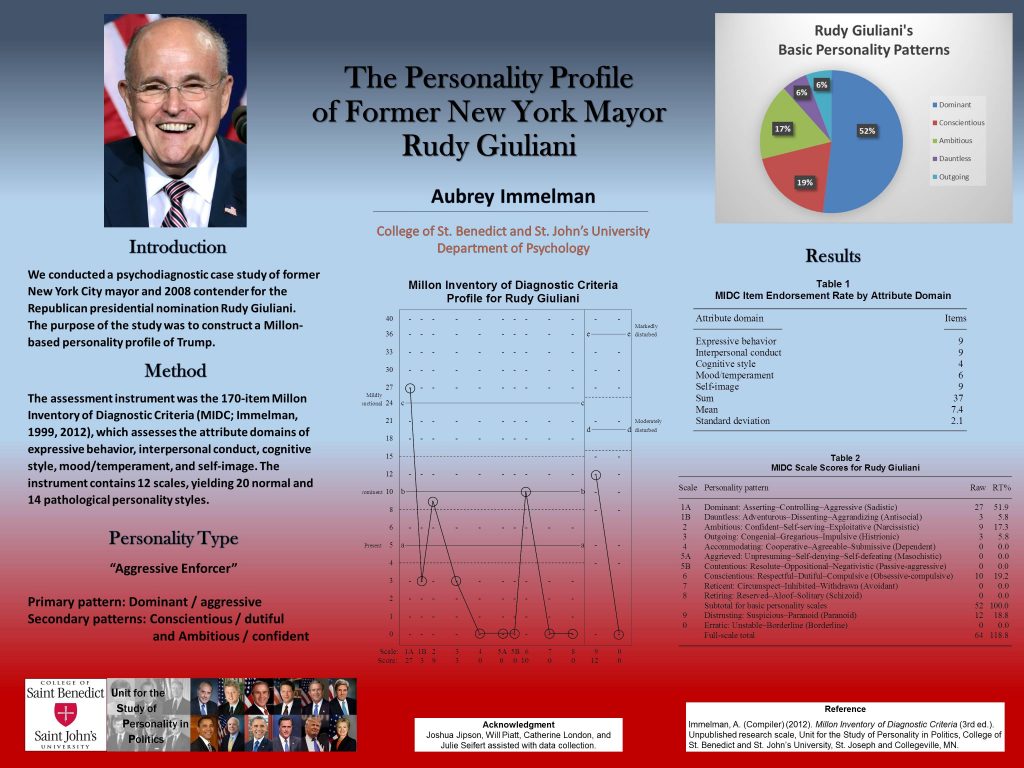 Psychological analysis of former New York City mayor Rudy Giuliani — a 2000 candidate for U.S. Senate and a 2008 contender for the Republican nomination for president — conducted in 1999-2000 and 2007-2008 by Joshua Jipson, Will Piatt, Catherine London, Julie Seifert, and Aubrey Immelman, Ph.D., at the Unit for the Study of Personality in Politics revealed that Giuliani’s primary personality pattern is Dominant/aggressive, with secondary features of the Conscientious/dutiful and Ambitious/confident patterns. The combination of highly dominant and conscientious patterns in Giuliani’s profile suggests an aggressive enforcer personality composite.

Leaders with that particular personality profile are characteristically tough and uncompromising, with a forceful style that permits them to take charge in times of crisis; however, they are not known for being very diplomatic.

Giuliani’s major personality strength in a high-level leadership role is a forceful, commanding personality style that permits him to take charge in times of crisis and inspire public confidence. His major personality-based limitation is a controlling, occasionally punitive, tendency to control (which may foster divisiveness and animosity).

Giuliani’s past is glimpse of future (Catherine London, St. Cloud Times, Nov. 29, 2007, p. 8B) — GOP front-runner Rudy Giuliani faced off Wednesday night against his party’s other presidential hopefuls in the CNN/YouTube Republican Debate. An article in Slate magazine last month examined “Why Giuliani keeps trouncing his opponents when they go head to head” (Giuliani’s Secret, Oct. 10). In that article, Slate chief political correspondent John Dickerson comments on Giuliani’s “awesome command of detail” and commanding stage presence, which give him the appearance of “a guy in control, bursting with snappy competence.” … Full report

Is ‘new Rudy’ the real Rudy? (Aubrey Immelman, St. Cloud Times, June 4, 2000, p. 9B) — When New York mayor Rudolph Giuliani ended his Senate bid on May 19, speculation was rife about the “new Rudy.” As the New York Daily News breathlessly editorialized on May 20, “Rudy Giuliani’s announcement that he is stepping out of the race for U.S. Senate, as moving as it was riveting, revealed a side of his personality rarely seen in public. Yet there could have been no better illustration of why he would have been a superb candidate. It showed him to be not only honest and straightforward, but also compassionate and deeply committed to the people of New York.” … Not so fast. … Full report

Senate would test Giuliani’s resolve” (Joshua Jipson and Will Piatt, St. Cloud Times, Dec. 12, 1999, p. 9B) — What happens when a schoolyard bully, so to speak, moves up to boarding school? If New York mayor Rudolph Giuliani is successful in his U.S. Senate bid, we’ll find out soon enough. Regardless of the state in which they are elected, senators are powerful players on a national stage; their political performance, ultimately, affects us all. … Full report